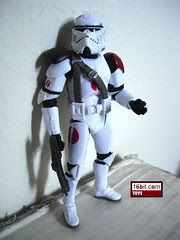 Bio: During the final days of the Clone Wars, Stass Allie leads clone troopers on the desert world of Saleucami. While patrolling on a speeder bike, Allie is struck down by clone troopers who receive Order 66, which directs them to treat all Jedi as a threat to the Republic. (Taken from the figure's packaging.)

Commentary: The Saleucami Trooper started life as a Wal-Mart exclusive Commander Neyo-- only now he's missing the dirty battle damage, so that makes him the generic trooper. Nothing too fancy, I know, but that's how these things work. This trooper uses the body that was first used as the 2003 Super-Articulated Clone Trooper with a new helmet and new belt-- so you basically know you can expect 14 points of articulation, all sorts of ball joints, and other goodness. He can hold his gun just fine, he's bright white and seems less prone to discoloration as a result, but we can't prove this yet.

In short, if you picked up the Treachery at Saleucami Battle Pack, or the 2007 Commander Neyo, you basically have this figure. It is, however, different than those releases due to the missing battle damage and as such should prove worth picking up for those who build armies, collect variants, or, like me, still buy figures that are just different enough to make you mad.

Collector's Notes: Hasbro has been shipping this one on and off since his introduction on a basic cardback, so he shouldn't be too hard to get.

The only flaws with this figure are that, from my experience, the AOTC super articulated clone trooper seems more prone to loose midsection joints than the standard ROTS SA clone. And the other than being a character shown only seated on a speeder bike, it's near impossible to get him to sit, or at least without risking damaged or permanently loose hips.