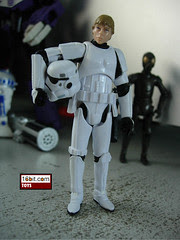 Bio: Luke Skywalker and Han Solo subdue a couple of stormtroopers and steal their uniforms. With their faces hidden by the helmets, Luke and Han can now walk through the Imperial battle station and search for a way to escape. (Taken from the figure's packaging.)

Commentary: It took a while but Hasbro finally essentially "perfected" Luke Skywalker in Stormtrooper Disguise. This is based on the 2004 body, which was painted up in comic book colors a few years ago, and now comes to you in basic white. Luke seems just a smidge smaller than Han Solo in a similar outfit, but has a distinctive helmet which is closer in line to the 2007 basic carded Stormtrooper in that the lenses on the helmet and the black band around the forehead touch. It's a little off and stands out in most crowds of Stormtroopers, but what are you going to do? Luke has 14 points of articulation-- as expected-- and can hold his blaster without too much trouble. In 2003 this figure would blow your mind-- but today, it's just another great release that doesn't really demand any great attention. In a way it's sad, and in another way it's pretty cool.

Collector's Notes: A strong seller in 2009 and 2008, this figure was repackaged a few times and he came with multiple droid parts. As such, any premium you pay for this one will likely be due to popularity, as plenty were produced and he isn't remotely "rare." If by some miracle you find a cache of them cheap, buy 'em all and glue down the helmet. This figure is just as good as your average Stormtrooper these days.

I've often wondered how they got away with that head sculpt... I've seen it around, and I know they've used it on other figures. But it's just wrong. It looks nothing like Luke.