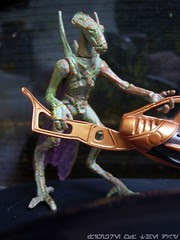 Bio: Though they lack ranged weaponss, they have the ability to fly, giving them an acute advantage on an open battlefield, and their powerful force pikes can kill with a single blow. (Taken from the figure's packaging.)

Commentary: While at first glance it would seem that this Geonosian Warrior is just a repack of the 2002 figure, well, you'd be wrong. Based on the unfinished "nude" design of the alien, this figure repaints that first 2002 offering in a less metallic, more toy-like coloring with similar-but-different colors. His green eyes stand out as being different, and he is really good at holding on to that giant sonic blaster. The figure has spindly limbs and a mere 6 points of articulation (plus articulated wings), but he has absolutely no problems carrying that big stupid gun which was released quite a while after the figure made its original carded debut.

As a spindly figure, be careful storing him if you open the boxed set-- his limbs could become distorted over time, and the same can be said with his weapon. His awkward pose is actually ideal for standing upright without a display stand, aside from the fact that he lacks the armor seen in the movies this is a top-notch trooper. Sometimes simple works, and considering his role in life is basically to be beaten on by Clone Commando figures, it's not like this is a figure that needed to be anything too special. Which is good, because it certainly isn't too special. Separated from the set, you probably wouldn't give it a second look-- but as part of the collection? It's not too bad... just a little more naked than I'd prefer.

Collector's Notes: The price of this set continues to climb-- after a successful run at about $34, it now commands $70-$120 on eBay. Individual clones can get $30. As such, be careful when making a purchase, and be wary of future toy announcements at all times now-- Hasbro has hinted more than once they may redo these four figures, meaning you should probably not buy them as soon as that announcement comes down. It takes a long time for prices to depreciate as (surprisingly) it takes a long time for fans to catch on when their toy has just been devalued. So even IF a new set is announced, I'd expect it to be 2-6 months for the original set's price to go back down, given how similar items have behaved in the past. Or, you could just wait for the newer and probably better set that may or may not happen some day.

Adam, your prophecies are of Lucas-like proportions.