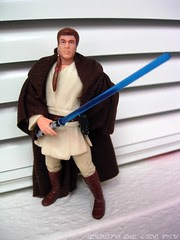 Bio: Though he was but a young Jedi during the blockade of Naboo, he was already a cautious man, who never approached a situation without careful thought. The sudden appearance of a Sith warrior was a huge shock to both him and his master. (Taken from the figure's box.)

Commentary: Since I've (we've? someone's?) forced the phrase "just different enough to make you mad" into the toy collector's lexicon, I think it's worth pointing out that this Obi-Wan Kenobi figure probably isn't different enough to make you mad but it's certainly distinctive enough to tick you off. By combining elements of multiple existing figures, this mishmash is very similar to other versions of the character sold in 2006, but, obviously, it's different. The Sith Lord Ambush Battle Pack Obi-Wan Kenobi sports a different hear, and the individually carded Saga Collection release has a head with rooted hair that's obviously different. In many respects this figure is a "variant" but since it's marketed differently and has its own unique construction, well, it's not a "variant" in the traditional sense. It's a unique figure cobbled together by the parts Hasbro decided to use that week.

The body was originally used in the 2000 Power of the Jedi Obi-Wan Kenobi. The head is a tough call-- it's probably the original POTJ head, but dang if it doesn't look a lot like the Episode I heads. The deco is similar, but it has the blue lightsaber that came with the Episode I Final Duel and Naboo releases. The communicator comes from the 2000 Episode I Jedi Knight release. The cloak is basically the same cloak that's shipped with numerous Jedi for a while now, so you might have one in your toy boxes allowing you to cobble this figure together from parts around the house. There's no real reason to track this particular release down unless you're stalking Ewan McGregor or are collecting all major figures-- this boxed set also includes R2-R9, and this particular R2-R9 remains exclusive to this set. Other, better versions of this character in this costume exist, particularly the one from Fall 2009.

Collector's Notes: The set did show up on closeout shelves so it shouldn't be too hard to get. If you want one, do some searching-- you can probably get it under retail (before shipping) with little or no problems. Given the quality of the set overall, it's worth the $20 or so.