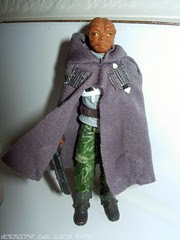 Bio: Major Panno is a Dressellian tactician who works with General Crix Madine to plan commando strikes for the Rebel Alliance. He assists Madine in planning the shield generator strike on Endor that helps destroy the second Death Star. (Taken from the figure's packaging.)

Commentary: Quality does not always facilitate sales. Hasbro's 2009 Major Panno was a spectacular new character release which sported all sorts of detail. He had super articulation, a commlink that fit into a cloth cloak, goggles, and a blaster. The gear meshed together nicely, and while the goggles were a bit of an awkward fit I'd go out and a limb and say the sum of the parts was still pretty good. This character doesn't have an eye patch (like we're used to seeing), and it's a figure that has been packed with detail. He can stand, he can basically sit just fine, and the sculpting job here was a great example of Hasbro doing its typical good job.

Some other notable details: the commlink fits right into the two sleeves on his cloak. The gold eyes give the figure a strange feel in that it almost seems that he's moving his eyes. The green camo on the pants turned out pretty well, as splotches go. I like this figure a lot in terms of what it turned out to be, despite the goggles being somewhat iffy, but the obscurity of the alien design made it just a little less appealing to your average buyer.

Collector's Notes: In 1998, the first modern Dressel figure came out and he was a different character named Orimaarko. Since the assortment was in shorter supply, he was slightly sought-after. The 2009 Major Panno didn't fare so well. In 2010, the Major Panno legs were reused for the vintage Endor Rebel Commando. The figure itself was a weak seller and could be found on clearance about a year after his release.

Email ThisBlogThis!Share to TwitterShare to FacebookShare to Pinterest
Labels: Rebellion, Return of the Jedi, TLC

Have Major Panno too! Great figure! Need some more of his Dreselian brethren!

I got a variant on Major Panno I can't find any reference to. I had contacted Hasbro and they have no idea what I am talking about and asked I mail it into them (whatever). Instead of goggles he came with this weird short black whip. The com link was similar, but one end is an uneven flat cut, painted green..like the thing was a lightsaber or something. I didn't realize it was different at the time so the bubble packaging was thrown out..but it was made for the whip to fit into..and the droid part was missing and the white packaging for it mangled like it was forced out. Remains quite a mystery. Any thoughts?

Mark, I can't tell if this is a joke or not, but I'm assuming it's not. What you got was a swap-out, damaged or stolen goods. People buy figures and return them with the wrong accessories (or figures) which is an overly complicated form of how cheapskates shoplift. Even if it looks sealed, it doesn't matter-- it's REALLY tough to tell at times and what matters is that you got screwed here.