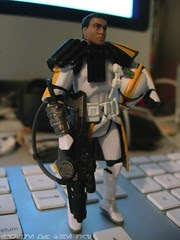 Bio: Master Sev is a Jedi general in command of clone troopers aboard a Republic attack cruiser during the end of the Clone Wars. (Taken from the figure's box.)

Commentary: It never ceases to amaze me how many times Hasbro can repaint the same mold and still have it be interesting. This particular yellow ARC Trooper was inspired by the Clone Wars Adventures comic series, where he shot Sev during order 66. The figure is a pretty accurate realistic interpretation of the armor, and was made by repainting the 2007 ARC Trooper figure with two major changes-- the kama was swapped out with the Commander Bacara mold. (To most of you, I figure, that won't mean anything. But it's real important to us clone dorks.) Also, the lower legs are taken from the first super articulated Clone Trooper figure. So it's mostly a remake of the Alpha ARC Trooper.

It's still great-- he holds his gun fairly well, the helmet comes off just fine, and the head sculpt is a normal, unspiffy take on Temuera Morrison's head minus any scars or fancy-pants haircuts. (Those didn't start appearing on toys until 2006, and this 2007 mold was rooted in the pre-2005 comic book design world.) Because of all the gear, the figure's super articulation is cut slightly short although it's better than not having it at all-- you can get some pretty decent motion out of these guys, and if you like to set up battles and such this is a great addition to your armies. I wish they did more multi-colored movie ARC Troopers!

Collector's Notes: This yellow ARC Trooper proved so popular, Hasbro rereleased it on a Saga Legends cardback pretty darned quickly. You can find it on the blue-and-white Legacy cardbacks, if you're lucky. It's about five bucks. The set with Sev is about $5-$10, and the one I'd suggest you get because Sev is worth owning.

I've never decided whether ARC Troopers are cool or just overly equipped and a bit stupid. Does the kama serve a purpose? The big pauldron?

Why couldn't they make the helmet range finder moveable?