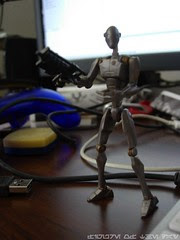 Bio: Commando droids land on the Rishi moon to attack a Republic outpost. Designed for surprise assaults, the droids quickly overwhelm the new clone trooper recruits stationed there. With this strategic outpost now in Separatist hands, General Grievous has everything in position to launch a surprise attack anywhere in the Outer Rim. (Taken from the figure's packaging.)

Commentary: This Commando Droid holds an important distinction-- it folds up small. Seriously, I store these things in tackle boxes and you can fold up this droid to fit into the tiniest sized compartment. Amazing! I'm impressed, even the normal Battle Droid isn't quite that flexible. Hasbro did a bang-up job on this guy, and the mold has been used on multiple versions of the droid so far-- this is the basic carded edition, which is probably one of the least common given how common the Rishi Moon Outpost Attack Battle Pack is lately. (Of course, that figure is a little different, so there.)

This figure is the very first version of the robot released, and sports a ton of articulation-- depending on your standards, I'd say this figure qualifies as super-articulated. His wrists swivel, but at the elbow-- so it's the entire arm moving and not just the hand. Even the hips are ball-and-socket joints, so if you want you can pop them off for "battle damage" or just leave them on to enjoy the increased amount of movement and, more likely, safety that they bring to the toy as a plaything. Basically, this is the level of articulation you want (and do not get) on a normal Battle Droid, so be sure to pick up this guy and know that it is (as of today) Hasbro's finest Separatist droid action figure in terms of engineering. It even has a waist joint, and it's well-hidden so you might not even realize that it's there.

The deco is simple, but effective-- there are some bronze/gold markings on the figure as well as white eyes and a red light. When you buy the figure-- and you will-- take care to note the wear and/or tear on the bronze paint as I expect it will rub off faster than other colors. The metallic silvers, bronzes, and golds tend not to last on playthings, but if you leave it in the package or display it you should be OK. Even still, examine it-- some of the recent Iron Man figures look worn even before you open them.

Collector's Notes: The figure was repainted as a blue mercenary as a Target exclusive in late 2010, which is the most distinctive repaint of the droid so far. There were two different repaints in the Rishi Moon Outpost Battle Pack, one has a lot of silver markings and a sword while the other is a basic grunt. The battle pack version has a richer, slightly redder gold and a grey gun rather than a black one, so it's different enough to be worthwhile for army building. The basic carded version, as reviewed here, seems to be worth about 5-10 bucks on eBay lately.

I never got any of this droid. They seemed too puny to me.

Possibly one of the ten best figures Hasbro has ever made. Incredibly posable, he stands on his own in almost any pose, the likeness is perfect (granted, easier than a human likeness), and even the repaints are cool. It was nice that one of the few cool droids on CW actually got a neat figure. He can store his gun on his back, etc. A home run as a collectible and a toy. Remarkably well done.

^Agreed. Hasbro has done a really nice job with the CW line as a whole.