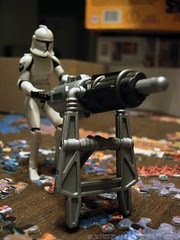 Commentary: If you've been reading this column there's no shortage of Clone Trooper figures, like the Turbo Tank Support Squad here. These were part of the "vehicle" assortment which, sadly, quickly became a higher-price version of the Battle Packs with less stuff in it. While arguably a better value than two carded figures, this set gave you two of the same off-white Clone Trooper figure, complete with unique shoulder tampo logo and the 2009-style revised helmet which, as always, looks a little bit better than the 2008 sculpt without the notch in the chin. I thought I reviewed this one, but I guess all I did was make a video for work. But I digress.

The body is the 2008 standard, with swiveling and pivoting wrists and a grand total of 14 points of articulation. He can be posed to man his station, and the station itself is arguably what makes the set neat. The tripod is removable, and can be positioned to stand on its own or plug into the open sides of the giant Turbo Tank vehicle (sold separately). Multiple greys and silvers combine to make a pretty nice-- if ultimately smallish-- weapon that can be used to pimp out your expensive ten-wheeled vehicle of doom. It's awkward to pose the figure with his gun, but it's still worth snagging to add to your army and you'll want the guns for the vehicle. It's not a staggeringly unique figure, but obsessive collectors will no doubt enjoy adding yet another variation to the grand army of the Republic.

Collector's Notes: The set has two troopers, two pistols, two rifles, two projectiles, and two cannons with tripods. It's pretty darned sweet, but as "value" goes it's iffy-- the Battle Packs of its day were about $20-$25 and had four figures with accessories. eBay says that this set is worth about $10-$15 before shipping, effectively meaning that it (after shipping or whatnot) has maintained its original price. I'm a little surprised, but hey, that's good-- you won't have to pay a premium to outfit your Turbo Tank.

Those cannons are great if the enemy happens to be standing in front of them. No swivelling kinda limits their use...yeah, yeah...it's only a toy, I know.