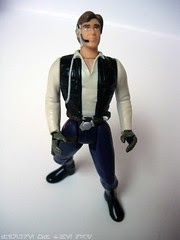 Bio: Han Solo became caught up with the Rebel Alliance, courtesy of Obi-Wan Kenobi, Luke Skywalker and Princess Leia Organa, whom he helped rescue from the Death Star. Solo helped Skywalker destroy the Death Star when it attacked the Rebel base at Yavin 4, where they had taken Organa. Solo became an unofficial member of the Rebel Alliance, and fell in love with Organa. He helped destroy the Second Death Star at the Battle of Endor. (Stolen from Wookieepedia.)

Commentary: It wasn't until late 1998 where we started getting figures where fans were really starting to scratch their heads. "Is that Han Solo different?" Well, yes-- this model looked astonishingly similar to the PC game figure sold for about $40 later in the year. This one came first, doesn't have jointed knees, and is slightly thinner than most of the "new" Han Solo figures from 1995-1998. He can stand, and he can more or less fit in the Gunner Station accessory with some futzing-- Kenner wasn't huge on figure/playset compatibility in those days, and they're getting a lot better about it lately. By today's standards, the figure is probably worth skipping. Ten bucks? So what, if he can barely stand on his own (he can't) and doesn't even have a gun? Ah well.


Collector's Notes: The figure was pretty common and was also available in the Great Closeout of 2000 at Toys "R" Us and Kay-Bee stores. In short, it's pretty worthless-- in 2007 Hasbro made a new version of this figure using new and old parts, so there's really no need to pick up the 1998 release unless you positively, absolutely, simply must have them all. The 2007 one was also included with the big 2008 Millennium Falcon vehicle/playset. Save your money.

I recall buying him new at full price...what a waste of money. Those gunner stations were useless.