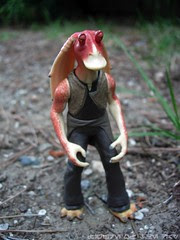 Bio: Gungans produce many of their structures using a secret method that actually "grows" the basic skeletons of many of their vehicles and weapons. The Gungan assault cannon is created from this process and then fitted with electronic components to create a powerful assault weapon. (Taken from the figure's cardback.)

Commentary: One of the great challenges in animation is to convey a personality of a figure. This is usually done through things like the pose and facial expression, two areas where this Jar Jar Binks figure opts to bore you. Released long after people knew who he was and what he should be like, this figure looks outright serene, almost bored compared to his low-level manic persona on the big screen. This was a guy who'd scream, jump, and step in a pile of poo-- and this figure? Well, he just looks like he's standing around waiting to film the next take. With a body sculpt that draws from the 1999 basic carded figure, this release has no articulation from below the waist and is actually a little disappointing. As a pack-in with a cannon accessory he's basically acceptable but the cannon isn't exactly a pile of fun either.

Jar Jar can't sit-- at all-- he has no hip joints. This figure's sole purpose is to stand and fire a cannon, or if you wanted to just make him stand, there's that. While this isn't the figure with the least play value of the entire modern line, he's probably in the bottom ten. I wouldn't suggest even considering buying this one unless you're a Jar Jar completist or really want the cannon. (The cannon, I should add, may misshapen with time and gravity so take care when storing it so it doesn't get bent out of shape.) If you have the basic 1999 carded figure, it's better than this one-- trust me.

Collector's Notes: The set was something of a weak seller in its day, and today can be had for under $10. Were this a regular retail release for $10 I think you might find it lacking, particularly when compared to the other "Invasion Force" vehicles which were actually, you know, fun. And the figures could sit. But who's keeping track?

I'm left wondering why they did use some of the millions of Jar Jark bodies they cranked out for the carded releases, rather than make a new less poseable one.