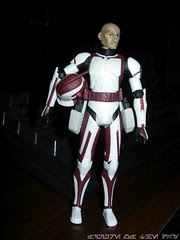 Bio: Commander Stone takes part in a mission to rescue Republic hostages being held by Weequay pirates. The clone commander battles the ruthless pirates and dodges sulfuric geysers to help Jar Jar Binks deliver the ransom and free the prisoners. (Taken from the figure's box.)

Commentary: The endless parade of Jango's doppelgangers continues with Clone Commander Stone. While not a particularly memorable character (largely due to not recurring on the show much), the figure is of great significance-- Stone marked the debut of the second major body type used on animated-style Clone Trooper action figures. Before him, everybody used the same basic body design since 2008 with different heads, helmets, belts, or kamas to mix things up a bit. Stone was a complete resculpt, with a swivel waist, swivel elbows, and no ankle joints. That's right-- Hasbro took two points of articulation out and simplified several others. The end result is a better looking, more authentic action figure who can't sit worth a damn. Those hip joints suck.

The deco is fantastic, his scruffy bald head looks wonderful under the maroon-accented helmet and matching armor. Both holsters have no problem storing his twin firearms. While many fans dislike the simplified design, I can't deny that it certainly looks nicer. I do, however, frequently feel confused over the true audience for this line-- Hasbro says it's for the kids, but blocking the legs from having meaningful hip articulation seems like something you'd do to collectors and hope they don't notice. It's not conducive to getting the figure inside vehicles, but I suppose if you bother buying Stone you've probably already got dozens of other clones piloting your tanks. While not essential, the figure is significant in the development of The Clone Wars as an action figure property and a meaningful milestone in the evolution of what are essentially the title characters.

Collector's Notes: Like many new characters from the 2009-2010 The Clone Wars line, this one was a little tough to come by and held on to his value-- now he's about ten bucks. He's also off the market, so good luck finding one easily.