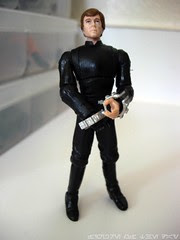 Bio: Luke boards the second Death Star during the Battle of Endor to face his father and the evil Emperor Palaptine, in a confrontation that determines the fate of all three. Young Skywalker calls upon his Jedi skills to save himself - and his father. (Taken from the figure's packaging.)

Commentary: Hasbro's increasingly bizarre takes on Luke Skywalker's various Return of the Jedi toys are nothing short of confusing. While this version is fairly straightforward, we've seen them based on deleted scenes and actual scenes with some fairly glaring errors, on occasion corrected and on other occasions we were blatantly told we were wrong and the figure was correct-- despite previous figures, subsequent figures, and movie stills saying otherwise. But I digress, let's talk about this one.

"Death Star II" Luke has been a tough one for Hasbro, since the first version of the character was produced in 1998 we've seen all sorts of tweaks and none of them were really satisfactory. Before the 2009 release, the last memorable one was in 2003 where Luke had the ugliest, meanest face sculpt you've ever seen on the character. This 2009 version was meant as the "ultimate," and while a 2010 release kicked its butt the 2009 one was certainly ambitious. The head sculpt was certainly acceptably Luke-esque, and the articulation was up to snuff providing us with the 14 joints we so crave. Heck, the figure had no problem holding on to his lightsaber and zero problem sitting down. So what was the problem, you ask?

Look at that chest. Despite Hasbro's ingenious decision to include a removable torso piece so you can swap the "open flap" for the "closed flap" (pictured), the chest had one simple problem: it's too big! The toymaker has done a great job getting more human proportions on the bulk of action figures designed since 1998, so this unusually large chest really sticks out-- typically only the female figures are the only ones with oversized chests, and rarely does a fan complain about that. While Hasbro has done removable chests on various droids, this is a rare instance of Hasbro giving fans the chance to change costumes on their own rather than planning a variation down the road to re-sell the same figure with one minor change-- although Hasbro did do an all-new version of the figure in about a year, so maybe they were planning on it all along.

Having said that, I like this figure, and I thought the recently released perfect Death Star II Luke was a little premature, if awesome. The 2009 release had great poses for his fingers, plus he was fun to play with-- which was totally not the case with the 2003 version, or some of the other ones. The cuffs were a nice touch, the costume looked right, and it felt like more of a toy than a top-notch collectible-- maybe that's why fans didn't much care for it.

Collector's Notes: Complaints aside, this figure sold extremely well-- while most movie figures were cycled out of assortments after one wave, this Jedi Luke kept shipping into early 2010. The market has spoken-- it's a good figure. Sure, the 2010 one was more awesome, but this one certainly scratched the market's itch and probably sold better than any other 2009-style packaged action figure in terms of quantity. That's nothing to sneeze at. On the secondary market, the prices are roughly that of original retail. That's not bad when you consider several of those Legacy figures' prices dropped.