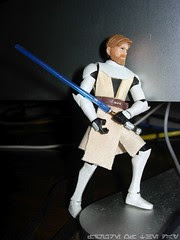 Bio: Obi-Wan uses a Freeco speeder to traverse the snow-covered planet of Orto Plutonia while investigating an attack on a Republic outpost. The speeder has an enclosed cockpit designed to shelter the rider from the cold. The Jedi heads into a snowstorm, following the tracks in the snow that will lead him to the perpetrators of the assault. (Taken from the figure's packaging.)

Commentary: Want a super-articulated Obi-Wan Kenobi as seen on The Clone Wars? This is it! The mold takes the basic sculpt of the 2008 release and adds all-new super-articulated legs plus a cloth bit so he can sit. In short, this is the figure you wish came on the blister card. He can stand, sit, and be posed with his weapon quite nicely with what will likely the the Best Body Sculpt this particular costume will ever get. (A less-armored version is coming in 2010.) The only area in which this figure is lacking is the head, as the first 2008 issue didn't look exactly like the character model and neither does this one. It's a little wider and a little less angular, but it hits all the beats of the character design quite nicely.

If you display your figures, and if you play with your figures, this should be an essential figure as it can actually do things like sit. (Sitting is important, which you'll remember me say a lot in this column.) This installment is a little light on details because really, other than the legs, not much here is new and it is, at press time, as good as the character gets in this format. Should Hasbro opt to do a new version with, for example, a place to hang a lightsaber off his belt, or a new head sculpt, or pivoting wrists, I'd say you have a reason to buy a new version of the character. If not, get this one, because you aren't going to do much better otherwise.

Collector's Notes: This is an interesting piece as reuses go. The vehicle was rereleased in late 2010 with a snow Clone Trooper figure, and the same figure was also rereleased in 2010, but packaged with a special Speeder Bike with a sidecar. (I should note, that bike is a damned fun little toy despite your not buying one.) The set as originally sold wasn't especially tough to find, so don't go overpaying for one.