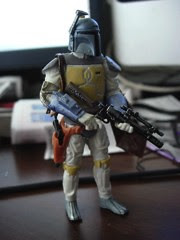 Bio: In the animated television series Star Wars: Droids — The Adventures of R2-D2 and C-3PO, Boba Fett acquires BL-17, a Battle Legionnaire battle droid creted to serve Mandalorian Protectors during the Clone Wars. The bounty hunter uses the droid on espionage missions while hunting fugitives. (Taken from the figure's package.)

Commentary: Sometimes a figure turns out exactly like it was planned, and other times you get the 2009 Wal-Mart version of animated Boba Fett. (See notes below.) The figure ended up being a rerelease of the 2007 animated Boba Fett figure, but with the accessories of the 2008 Evolutions Boba Fett figure. The pistol fits in the holster just fine, and the rifle looks like a normal realistic Boba Fett rifle. In short, it's cartoon Boba with movie gear.

The figure has all the successes and flaws of the original 2007 release. The cloth cape is here, the "new helmet" mold which was prototyped and shown to the public still isn't used, and he's super-articulated. If you're like me an are absolutely nuts about Droids (the animated series) this figure and set are no-brainers-- you're going to want BL-17, and you're going to want a slightly different Boba Fett. This is the one that can menace Thall Joben, while the other one tries to screw with Chewbacca on a goo planet. The 2009 animated Boba Fett is the very definition of "just different enough to make you mad," which is a shame because it was at one point intended to be an extremely different-looking repaint.

Collector's Notes: The most fascinating thing about this figure is what it isn't-- the original plan was to put this mold out in Empire Strikes Back movie-styled colors. The funny thing is that the final toy was in stores just a week after its Comic-Con 2009 debut, and the two really don't look anything alike. Given the mold changes (specifically the hands and belt) I think that would have been a much neater way to go, particularly since BL-17 wasn't exactly "toon styled." So for those keeping track, that makes two different versions of the Animated Debut Boba Fett figure that never made it out to store shelves.

I found this interesting and Insightful. Hazzar!
Declan xoxo