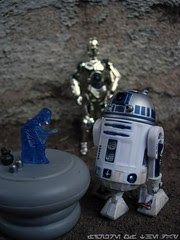 Bio: The determined astromech droid carries out his secret mission, resulting in a fateful meeting betweenn Luke Skywalker and Ben Kenobi. (Taken from the figure's packaging.)

Commentary: There have been many, many R2-D2 figures over the years including a brand new resized one in 2010. Many fans agree that the 2009 version pictured here (itself a repaint of the 2005 R4-G9 action figure) is the best. The subtle dusting on the feet, the silver of his dome, and the big black eye all help to bring what many consider to be the perfect astromech droid mold to life. There aren't any features to gum up the appearance, and the eye isn't too flat or anything. Plus the figure is scale to most other astromech droids, effectively making it the go-to figure. (I doubt they'll ever make more droids based on the 2010 Vintage R2-D2 as a standard size.) So yeah, of the many R2-D2s released since 1978 I would put this one as the overall best in terms of aesthetics. It's a crying shame Hasbro hasn't rereleased it just yet, as the rest of the set (with the upcoming release of another new Luke) may not be worth your trouble.

Collector's Notes: To date, this exact R2-D2 has not been reissued, and it seemed to be tough to get upon its initial release. If you're looking for a deal, stalk eBay and hope people can't spell "resurgence." Just R2-D2 from the set by himself goes for about five bucks, which is a bargain you totally need to buy before people realize just how cheap it is to pick up right now. I should also note, I saw a bunch of these at Ross stores around the middle of January of this year.

I had this figure.... it was on display on a shelf on a wall in my bedroom above a garbage can. Little did I realize that his perch was a precarious one.... One day I notice Artoo isn't on the shelf, and he's nowhere else to be seen in my room. I tore apart every inch. Then I noticed where the garbage can was in relation to the shelf and the realization hit me. I inadvertently threw away the best Artoo figure I owned :(
- Shoeless Jedi