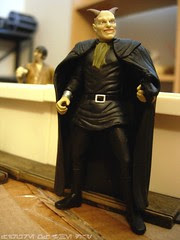 Bio: Their remote location makes the spaceports of Tatooine havens for many suspicious travelers from across the galaxy. At the Mos Eisley spaceport, Chalmun's Cantina is a popular hangout for the rough crowd and deadly violence breaks out on a daily basis. Takeel, a Snivvian, is known to dabble in bounty hunting and smuggling. The horned Devaronian Labria calls himself an "information broker," though his information is questionable at best. No one knows for sure what the Morseerian known as Nabrun Leids looks like underneath his breath mask, which he must wear in all non-methane environments. The former fighter pilot will fly anyone or anything anywhere, if the price is suitable. These kinds of patrons have helped make Tatooine's spaceports famous as a wretched hive of scum and villainy. In the days before the Galactic Empire, the spaceport of Mos Espa hosted many similar characters. From the outdoor markets to the junk shops--overseen by the gambling crimelords, the Hutts--Mos Espa was a place where a nine-year old boy like Anakin Skywalker could learn the ways of the universe. (Taken from the Cantina Aliens box.)

Commentary: The third alien in Hasbro's pretty nifty Cantina Aliens pack from 1998 was Labria, which may or may not be giggle-worthy. The devilish alien was presented in a very pale light, with cream-colored skin and an outfit somewhat lacking in painted detail. Given that it's from before the prequels, it's no real surprise that it's lacking in articulation. Six joints allow this figure to stand, but because of his plastic cape he won't be doing too much sitting anyway. The detail as pretty good for the day and the figure had few problems standing or holding on to his gun. (You see, back in the 1990s, it was generally common for figures to be able to hold on to their gear.)

While time has dulled the excitement of the figure, there's no denying that this represented some pretty remarkable sculpting for the time-- check out the individual teeth and the wrinkles on his smile. As head sculpts go, this is a pretty remarkable example of what Kenner cranked out as Hasbro was rebranded as Hasbro in late 1998. The outfit is good, the cape isn't bad, but that face! The paint job was also pretty good, despite not exactly aligning with generally accepted coloring for Devaronian skin out costuming-- the skin should be redder, the ascot should be browner, the horns should be blacker. As a different character in your dioramas, I'd peg this as a must-buy, it's just that as Labria he isn't quite perfect. It's an odd way to describe it, I admit, but it's rare that figures are executed well but aren't authentic. (Well, maybe not rare as Cantina aliens go.)

Collector's Notes: Labria (and Nabrun Leids) received new life in early 2007 when Hasbro got a repaint wave. Labria had richer coloring, redder skin, and an overall better-looking appearance which would probably make that the version to get, assuming you only buy one. The original 1998 Cantina Aliens set remains worth buying because the Takeel mold has yet to be reused. Also, the current "official" name for the character is the unspellable Kardue'sai'Malloc which has not yet appeared as the main name on the toy packaging.

Where did you dig up that old fossil? Thanks for reminding us of some late 90s offerings.