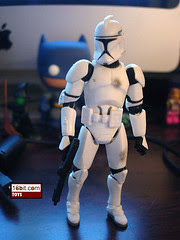 Commentary: Back in 2003, fans were still clamoring for more Clone Trooper figures and in early 2005 Entertainment Earth had an exclusive set of clones that basically satisfied demand for the then-hugely-popular super-articulated version of the figure. Rather than crank out all white figures, there were four "rank" figures as well as four "damage" deco jobs, as well as mixes of the two-- this is one of the "damaged" white clones. With a black splotch on his shin and his chest, there's not a lot of damage here, but back in 2005 any sort of damage was a welcome change in our figures. Since the figure's mold (but not deco) is still in circulation, it's no stretch to say that this is some of Hasbro's better work. I don't necessarily think you'll want to pay a premium for battle damage variants given how many hundreds of different Clone Trooper figures have been made since this one hit mailboxes, but hey, it's one more for the armies and for your vehicles if you're so inclined.

Collector's Notes: This deco is exclusive to this set, so shop accordingly.

This guy was a real breakthrough in 2003, and the EEarth packs were also very welcome - finally, army builders in quantity. Of course now, every figure is super-articulated and packs of trooper packs are common.