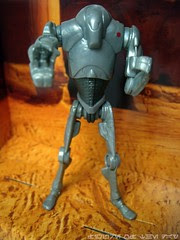 Image: Background from the packaging.

Commentary: This Super Battle Droid was a gem of a mold in 2008, and since then Hasbro has been quietly repainting, remolding, and improving the figure with each release. This one gives the figure a less intensive deco, but improves the legs a little-- while not immediately obvious from the photo, the ankles on this one are articulated which (as some of my figures are hard to get to right now) I believe may be a first for this mold. I'm not sure why the figure was cast in a lighter shade of grey, but it was, and here it is. The red dot is still present, and the figure got some additional paint detail on the gun plus the lower parts of his torso, making it a unique version that's worth buying if you pick up every variety of the Super Battle Droid. If not, well, it's going to be tough to army-build so it might not be quite what you're after. Since it can stand, sit, and generally look cool I think it's a worthwhile purchase and probably the best version of the mold-- not deco, but mold-- so far.

Collector's Notes: Unlike the 2009 sets, this series seems to have sold through quickly. Most stores seemed done with them prior to Christmas, so if you see one in the wild (barring a large second shipment) you should probably grab it while you can. His companion figure was a tweaked Obi-Wan Kenobi which was altered just a bit-- it's probably worth getting if, again, you like different heads, deco, and weapons for figures you have already probably bought. The set was on sale for $9.99 almost immediately after release, so hopefully you got a good deal on it. Also notable: the jointed ankles for this figure were not kept for the 2011 The Vintage Collection release of the mold. A shame! So get this one if you want the best version of the mold, although it's not necessarily the best paint job.

All of the movie-based SBDs have been a disappointing for me. For some reason, the sculpt seems flimsy and oddly proportioned, the legs and feet (even on this guy) always seem to be warped or oddly non-symetrical, and the deco is substandard. In contrast, the Clone Wars SBD is great. I hope they get this guy right some day.