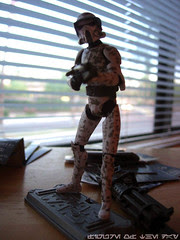 Bio: Advanced Recon Force (ARF) clone troopers conduct reconnaissance missions. They are trained in stealth techniques to gather information without being detected by the enemy. Wearing jungle camouflage armor, they are deployed to the planet Teth to scout the location where Jabba the Hutt's son Rotta is being held captive. (Taken from the figure's packaging.)

Commentary: This ARF Trooper was one of the first figures fans started asking for after the movie hit in 2008-- and in 2009, we got the mold to make it. And a repaint. Eventually we got this figure, and on the whole I think that it turned out exactly as well as you might hope. As this is a repainted ARF Trooper, which was a retooled 2008 Clone Trooper, it really does have all the best features a Clone Trooper toy can offer. The ball-jointed hips of the ARF Trooper are present, allowing him to use pretty much any vehicle ever designed for this scale of figure. The pivot-and-swivel wrists are here too, allowing him to use pretty much any gun ever made for this scale. In short, this is a great redeco of an already fantastic figure-- the ARF Trooper is really the best in breed when it comes to Clone toys, so this Jungle Camo version is well worth a look if you don't already have too many of the other ARF toys put out so far.

The main thing that sets this figure apart is the Jungle deco. A little green, a little brown, and the important thing is that it isn't just another white action figure. A little color goes a long way on these guys, and you'll probably want to get two in order to replicate the scouting on Teth seen in the movie. Great stuff, and some of Hasbro's best work.

Collector's Notes: In addition to this version, a plain white version is still in circulation and there's a Geonosis-themed repaint of the mold as ARF Trooper Boil. I'd suggest picking up Boil with his AT-RT first, but this Jungle camo version is easily the second best of the three-- and you'll want a pair of him to replicate the Scout Party from The Clone Wars movie. There's nothing wrong with the white version, it's just not as ornate as the others.