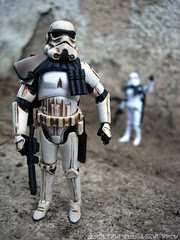 Commentary: Sometimes Hasbro is a confusing company simply because there are times where they leave lots of easy money on the table. The Sandtrooper was not one of these times-- after being very stingy with the various variant ranks of troopers and officers in the form of an action figure, they went completely nuts starting in 2005 up until 2008, cranking out figure after figure with slightly different dirt deco and rankings. I applaud this-- it's good for business (reusing parts) and collectors (offering trooper variety). Even if you aren't an army-builder, you'll still want to get several of the same basic figure.

Based on the 2006 Sandtrooper figure (which itself was modified from the 2004 Vintage Stormtrooper figure), this release has one of the most striking paint jobs I've ever seen on an Imperial figure. The clean white body was rubbed over with a layer of brown, which gives the figure a weathered look. While other figures look like a scaled-down movie costume which has been weathered, this one almost looks like it took a turn for the worse in a kid's sandbox. The deco varies slightly by figure, but you can see in the picture that the brown settled in various crevices to bring the figure a distinctive look. Originally it seems the intent was to replicate the look of the extra-filthy grey-pauldron 2005 Evolutions Sandtrooper figure, but it turns out that the figure looks a lot different than what was presumably his inspiration.

If you're buying this line, this figure should be on your short list of figures to get. Since his backpack and pauldron are removable, you have the ability to remove the added gear and wind up with a nifty, dirty Stormtrooper. As such, I'd say buy one or several-- you can mix-and-match the pauldrons and weaponry to come up with a diverse army of troopers using Hasbro's few official releases. This is a great example of one of Hasbro's absolutely best and most inspired repaints.

...having said that, the figure's not quite authentic. The helmet sculpt and lenses don't match the look of most of the Sandtroopers on film, so Hasbro could redo the sculpt if they really wanted to. (They came close to perfection with the late 2009 Dewback figure, which was recarded in 2010 as a Vintage figure.) For army scenes and crowd filler this guy is dynamite, but if you're a stickler for authenticity, Hasbro can do better-- and has. (I still love it anyway.)

Collector's Notes: The deco was available only in the Saga Legends assortments, making it one of the small number of figures unique to the sub-line which today is home to mostly just reissues. Prices will vary, but I can safely say that the figure's look is worth a premium on coolness alone... which is good, because it seems to command a slight premium over the other versions of the Saga Legends Sandtrooper.

I've often wondered why THIS version didn't get repacked in the Vintage line, rather than the too-clean one that is readily available now. Oh well.

I suspect the people who get really worked up over "sandtrooper" and stormtrooper costume differences are:

B. Not going to want this figure anyway, because the weathering is too overboard to come close to anything onscreen.

C. Busy working on a screen-accurate costume they can wear to some nerd -fest.