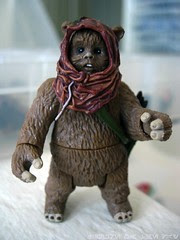 Commentary: You might think that the prospect of a three-figure battle pack wouldn't be compelling, but Hasbro made it work in 2009 with this set including Warok, Luke Skywalker, and Yet Another Generic Imperial. The amazing thing is that all three figures are significantly better or different from earlier incarnations, or in the case of Warok here, the only modern incarnation. Last released in the mid 1980s, Warok was then a grey-furred, reddish-hooded figure with a bow and arrow. Fast-forward to today and it looks like he's brown, wears an orangey-reddish hood, and may be more comfortable in a glider. It turns out a lot of the 1980s Ewok figures may have deviated from the costumes, and at some point, some goon decided that the Kenner names were wrong and assigned to the wrong figures. Why this was decided, I don't know, because it's not like anyone is going to go "What the hell do you mean that wasn't Lumat?" But I digress.

Warok shares body parts with Graak, specifically everything from the neck on down. The figure has ball-jointed shoulders and ankles, plus swiveling wrists, jointed hips, and a twisting waist too. The head sculpt seems to be about as good as any would be for representing Warok, although it seems difficult to tell exactly what the furball should look like. The cardback photo of the 1980s figure seems to be a brown body and a grey face. The original Kenner figure was entirely grey. The 2009 release as reviewed today is brown. So it looks as if technically none of the figures so far are completely authentic to the film design, but the modern one is pretty close. If they repainted it with darker brown fur and a greyer face, I think it would probably work out just fine. In a situation like this I'm not sure if the confusion as to how the character looks is due to an error in the approvals process, an error on the part of the original Kenner team, or just a general sense of people not really caring about such trivialities when it comes to Ewoks as a figure-species.

Since it's the only Warok since the 1990s, it's going to have to stand in for your modern Warok needs. However, I can't say with complete certainty that the little guy complete with his bow and quiver of removable arrows will be a satisfactory update to the Kenner figure-- maybe it is. Maybe it isn't. Because we have no other options and to date Hasbro has only made updates to Wicket and Paploo (since the 1990s/2000s figures), this is probably going to be it. The sculpt is there, but the coloring is not.

Collector's Notes: This battle pack showed up on closeout in late 2010 and early 2011, so the set has basically been devalued by time and abundance. I wouldn't suggest paying more than $15 for the set, although it's fun and neat enough to warrant $25 if you stumble on it and don't feel like searching for the best possible bargain.

I used to think the 80's Warok was supposed to be female for some reason.

There is a picture of the true Warok in "The Action Figure Archive". He looks almost exactly like this figure. The Vintage cardback is washed out making his face look lighter than it really is.

I don't care if the coloring is right, this figure is friggin' awesome. It's Warok to me.