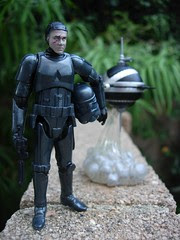 Bio: Shadow stormtroopers capture Luke Skywalker and Princess Leia on Vorzyd V. The Rebels are on the planet, also known as the Gambler's World, to stop the evil Empire's main source of income. After kidnapping the Rebels, the stormtroopers speak with Blackhole, the Imperial Intelligence Director, who orders the prisoners interrogated by an IT-O Droid. (Taken from the figure's packaging.)

Commentary: Hasbro made a killing repainting Clone Troopers so it only makes sense they applied it to Blackhole Stormtroopers, the first-ever major paint variant on the standard armor to be seen outside the films. The figure is, sadly, not painted at all like in the comics where the trooper had black armor and very distinctive silver lenses-- so really, the authentic version of a Blackhole Stormtrooper (as represented by Funko, Gentle Giant, and other licensors) has yet to make it out in any form from Hasbro. It's more of a dark blue color, with blue lenses and a removable helmet-- presumably since that was the mold available to Hasbro's factory, the characters in the comics left their helmets on.

The base figure is the 2007 Stormtrooper, which was based on the 2004 Vintage Stormtrooper but with a new head, helmet, and torso. This is a nice figure and a neat set, but ultimately you may find it more irritating than fun-- basically for $15, you get a trooper and two very large accessories in the form of Blackhole and a torture droid. It's a little expensive for what you got at retail-- it's still a neat curiosity and one of very, very few figure packs made after the newspaper comic strips.

Collector's Notes: This set came and went really fast, but its secondary market value remains on the low side, close to retail. It was meant to be a 2009 release, but only one "2009"-style packaging wave of comic packs made it out in all of 2009. This set was seen briefly online at etailers as well as in physical Target stores, plus there were a few odd sightings elsewhere. This was part of the final wave of these figures to hit the mass market, and the 87504 SKU was pretty miserably managed by stores and Hasbro over its 3-year run. Basic figures get a new number to flush out old product-- so do Battle Packs and vehicles-- but comic packs were stuck with the same number, effectively telling stores that these were the same things for several years rather than rebooting every 12-18 months.