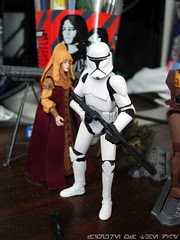 Commentary: Back in 2003, the release of the Super Articulated Clone Trooper ushered in our current age (and present expectations) for Star Wars action figure-- we expected 14 points of articulation and fantastic detail, and nothing less would do. Over the years, this then-perfect figure was revealed to be a little bit chunky but we still loved it and Hasbro didn't see much need to redeo it. Cut to today, the new 2011 version of this Clone is shipping from Hasbro as you read this (pre-order/order at a link below and I get a shiny nickel) and it really does look significantly better than previous releases. How much better? I'll go on a limb and say this figure, complete with its removable helmet, is so perfect that even I can't complain that the helmet is too big. Everything just works here.

The proportions remind me of a maquette in the Star Wars Chronicles prequel book, with very angular pectoral armor, a thinner build, and a wider mouth on the helmet. The details are crisper, he doesn't look at all blaoted, and he may be a little taller than usual-- he's certainly a smidgen taller than your average Clone Wars trooper figure.

Deco is, as usual, good. It's hard to really mess up, but having said that Hasbro did ignore a couple of minor details. The little grilles on the sides of the helmet (clearly visible in the cardback photo) were left off, the soles of the shoes were left unpainted (arguably not at all important), and it looks like some material is exposed around the ankles, instead of just being basically sealed armor. (This is not a big deal.) I figure Hasbro will correct the helmet lines if they haven't already, as fans will probably start mentioning it after they see the figure, so I'm predicting it now: let's expect a running change on this one. The really big surprise is that they added deco on his guns, so there are little silver details painted on both the rifle and the pistol, plus some bronze on the pistol. As far as his accessories go, this is really exceptional decoration.

So the sculpt is great, the deco is acceptable, but how about that articulation? You'll be impressed, I think. Not only does it have the traditional 14 points of articulation, complete with pivoting waist, but this figure also incorporates ball-jointed hips so well you might not realize that they're even there at first. Bending wrists were also included, and the joints are extremely well-hidden so you, again, might not notice those either. The shoulder armor now hides the "articulation rings," meaning that you can't have the arms stick out straight to the sides any more. I think I'm OK with that. The end result places a slight restriction on some movement, but it looks a heck of a lot nicer and can still assume pretty much any pose I would want from the figure.

Packaging Notes: Like many of the 2011 figures, the cardback data focusing on the "original" Clone Trooper is incorrect-- this time, it shows a figure that never saw release. The 2002 Red Clone Trooper packaging is shown with an all-white Clone Trooper inside, and was said to have been released in 2002-2004. The pictured figure-- and not with those accessories, or in that packaging-- did make it out as a Wal-Mart exclusive in 2003. Having said that, the very first Clone Trooper was actually the Sneak Preview figure from early 2002, and that came on a green Power of the Jedi-inspired package. In case anyone at Hasbro hires freelance copy editors: I've done a lot of catalog work, I'm pretty cheap to hire, and I'm a nitpicky pain in the neck.

Collector's Notes: This one appears to be shipping in Vintage Waves 6 and 7, and I'll go out on a limb and assume it'll be shipping in waves 8, 9, and 10 too. Even if you have a complete army, you're still going to want this one as well as repaints of this one. Hasbro did a really good job here, so if fans are paying attention to quality, it should be in short supply for a while.

I'm surprised they missed the grills after going through the same drill with the E3 Trooper.

the helmet is too big.