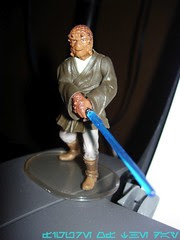 Commentary: This Nikto Jedi was given a name in this set, although it wasn't the one that headlined the box-- why kick it into the bio? How odd! Anyway, it's a reworked version of the 2002 Nikto Jedi Knight, with two big differences. One, his outer cloak is missing. Two, his arms are a new color to match the robes under the cloak. Other than that, and a missing lightsaber effect that's hard to describe, it's basically the same as the 2002 release. Oh, and his lightsaber hilt has some more black paint on it.

This Jedi warrior is articulated at the neck, shoulder, wrists, and waist. It can't stand on its own, so be glad the set included some clear oval-ish constructs to prevent face-planting. Overall, it's basically a statue and that was how the lesser characters were during the second prequel. The main guys had action feature, the secondary guys were display pieces. I like this figure because it shows just how different a little bit of color and a removed accessory can make a figure.

Conversely, I hate this figure because of my growing dislike for the removable hilt lightsabers. The blade comes out, but it was partially glued in so it sort of sags and feels like it's going to break. It's very unpleasant, and it makes me glad that Hasbro has largely went back on this idea and now primarily makes one-piece lightsabers. I've had this stored in its original box as I was nervous the blade would snap after the figure fell over, and I'm still tempted to permanently glue it in there because... it just doesn't look good. With the 2011 Vintage release, there is no reason to buy this one unless you're a nutty collector, and even then be aware it's pretty fragile so if you wish to avoid heartbreak and/or repair, I'd say don't buy it.

Collector's Notes: Unsurprisingly, this set is now effectively worthless. The main selling points were this figure, being the only unique figure in the set, plus an exclusive restraining device accessory for Obi-Wan Kenobi that Count Dooku used on Geonosis. But more on that later. This set is worth the $10 or so asking price these days, although if you aren't into variants or accessories this is a pretty boring set by 2011 standards.