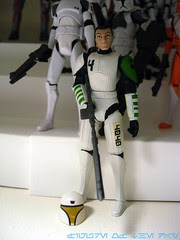 Bio: Clone troopers train for comb at on the planet Kamino.  Kamino is not only the place where the clone troopers are engineered; it is also where they are trained in battle tactics, fighting techniques and explosives.  Seasoned clone troopers push the cadets hard to turn them into the toughest and most skilled fighters in the galaxy.  (Taken from the figure's packaging.)

Commentary: One neat thing about The Clone Wars is that many clone troopers are basically retextured versions of the same model, so Cutup is cut from the same mold as Hevy.  By making one, Hasbro can do what the animators did and tweak the paint, giving us more figures from Domino Squad with little effort.  (So far, we've got two of the five.)   Close to a super-articulated figure, Cutup lacks ankles but is otherwise pretty poseable-- you get wrists, shoulders, all that stuff.  The helmet is partially transparent so you can actually see his face-- unusual for animated figures and clones in general-- plus he has a swell rifle.   The deco is similar to Hevy, but the number "4" now appears on his armor, as it's more appropriate for the other character.   While some fans give Hasbro grief for repaints, there are times where it makes a ton of good sense and this figure is one of them.  Heck, Hasbro can probably do at least another dozen figures based just on this mold, rounding out Domino Squad and then tackling the other teams from the series.  I hope they do, because Hevy and Cutup turned out pretty great!

Collector's Notes: The most popular set of the first batch of 2012 Battle Packs, the Republic Clone Troopers was the only one of the three which seemed to routinely sell out at retail-- this is, most likely, due to a combination of the show's popularity in terms of toys and/or the fact that all three figures in this set were obviously new and different to your average trooper fan.  As he shipped in wave 2 as well, there's a chance you'll still have a few opportunities to get it, and I do suggest you track this set down if you do cartoon figures.