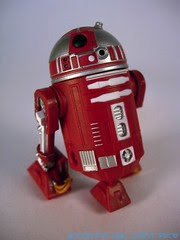 
Commentary: There's probably only one robot I could point to where Hasbro started strong, and each subsequent version, while different, was not necessarily essential.  Hasbro's first take on this figure was just fine, and this R2-R9 is just fine, too.  The very first 1999 release-- now slightly dated-- had a unique sculpt Hasbro didn't reuse, with a light-up projector rather than the wildly inaccurate light-up eye port.  The 2006 release in the tin was modeled after the R2-D2 vintage figure from 2004, which was good too.   And now, in 2012, we got another one-- still gorgeous-- using the build-a-droid sculpt.  For best overall aesthetics, I'd say it's a toss up between 2006 and 2012, because the 2006 release has a sort of ugly glued-on panel, while the 2012 release has build-a-droid holes on the bottom part of his body which serve no meaningful role to most collectors.  (They're here for kids who want to add extra legs, a rare instance of my poo-pooing play value over the visual appearance.)

Under the harsh lights of my photo "studio" (two light bulbs and a 35 cent sheet of poster board), R2-R9 looks great with his polished dome and the very subtle texture of the plastic on his body.  Articulation is normal for this kind of figure (neck, shoulders, ankles, removable third leg) and robot customizers will probably want to buy a few of it.  Heck, if it ever hits closeout shelves, I'm going to buy every last one I see.   At $25 it's a decent deal, especially if you love droids.  This particular body sculpt just plain works well, and it's nice to have a bunch of robots in this style for customizing, displaying, or whatever other reason you might have.

Collector's Notes: The set was set to launch in January 2012, but didn't really start showing up in the USA until April.  As such, if you think you missed it, it's worth your while to check your Walmart for the exclusive set before giving up.    This is a rare case of you not necessarily missing it early on, most reports came in of people just plain never seeing it, and few (but some) were on eBay in the interim.  I don't expect it will be expensive later, but man, it's great.  In light of the Star Tours build-a-droid slog, it's probably a good idea to get as many droid bits as you can.  You might need them later!

I just stumbled across this 4 pack on clearance for $15 dollars. It was absolutely my steal of the summer.

Adam - I agree, the original mold is unique.

I usually give my son the older sculpt when I have a duplicate figure (unless I also buy him a new one, but in this case the store only had one left). He really wants one of these red droids but in this case I may give him the new one and keep the original.

I suppose it is a good problem to have, especially given my recent troubles with locating new vintage in the wild...