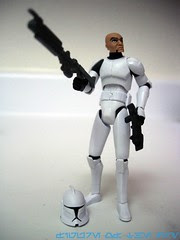 Bio:   The clone troopers are stunned when they discover that one of them is a traitor to the Republic.  When a droid battalion avoids an ambush, Captain Rex and the Jedi start looking for answers and uncover a breach in security.  Sergeant Slick and troopers Gus and Chopper all fall under suspicion and are questioned about their actions, as Rex helps the Jedi and Clone Commander Cody search for the traitor.    (Taken from the figure's packaging.)


Commentary:  Hasbro has put out few plain white clones since 2008, which is why I'm glad Clone Trooper Gus and the "Hidden Enemy" set was made.  It didn't exactly fly off the shelves, but it was a nice troop builder, once you can ignore the fact you're buying yet another Rex in the set.   Guns is pretty cool, with some gnarly facial hair, a bald head, and the then-newer helmet.  The sculpt has the usual 14 joints including bend-and-swivel wrists, which make all your gun aiming just a little bit better.  The figure has little problems sitting, and no more problems sitting than most troopers.  (Which is to say, it'll  bend his hips out of shape.)  It's a solid design and I kind of which it was sold individually so fans could buy a "blank template" figure, and paint on hair or beards as they wished.  Instead, he's an exclusive, but thankfully Hasbro and Target had him available for late 2010 and much of 2011.

Collector's Notes: You should have little problem scoring this set for $10-$15, or single figures from it for as little as $4.  I would suggest buying the set for $20 or less, just because Gus, Slick, and Chopper have yet to be released in any other configuration.  And the spare Rex?  Well, throw him in your Turbo Tank.  (First, get a Turbo Tank.)