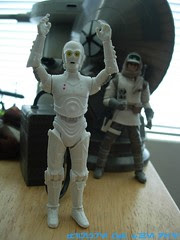 Bio:  The Rebels defend their base on Hoth with every available weapon in their arsenal. They know they can't defeat the Imperial forces attacking them, but they need to delay them long enough to evacuate the base.  Rebel troopers blast the enemy from laser towers that ring the base, and fire anti-vehicle cannons and medium repeating blasters at the Snowtroopers and AT-ST walkers.  (Taken from the figure's packaging.)


Commentary:  For a few years, Hasbro and Target managed to crank out some fan-friggin'-tastic exclusive gift sets for Q4.  We saw the Imperial Shuttle, giant boxes packed with figures and vehicles, and all sorts of goodies before the bang-for-the-buck factor took a nosedive for the most part last year.   Thankfully before the fun came to an end, we got a good-- but not fantastic-- K-3PO as part of the "Defense of Hoth" set.   In 2007, there was a set for under $50 which included an AT-ST, the Hoth Turret from this set, and eight figures.  This set got you a couple of big guns and three figures, and was about nine bucks cheaper.   There's really no comparison, I assume the rising costs of manufacturing had something to do with it but the change in value is really staggering now that we're a few years removed from both sets.  But enough about context, how's the robot?

This particular protocol droid is one of very few (so far) based on the build-a-droid mold.  Other than a couple of U-3PO variants, this is really pretty much it so far-- there's no C-3PO based on this mold, just a silver/champagne droid and this all-white plastic droid.  I have no doubt this robot would look amazing had Hasbro painted it white in addition to casting it in white plastic, but that's the kind of thing Mattel and the Four Horsemen do.   Hasbro lets the plastic shine.  The figure has 14 joints, although it's worth noting the shoulders don't have the awesome ball-jointed shoulders seen on a few other protocol droid figures.   There's actually very little paint on this figure, with yellow eyes, red dots, black pupils, and a smidgen of silver here and there.   As deco goes, the figure doesn't impress-- his belly area could use a little color, or more interesting coloring on those wires.   The level of motion is pretty decent, and certainly fits with the reasonably stiff movements of C-3PO.   You can pop off his limbs and swap them with other build-a-droid figures, although I don't suspect you'll want to do this.

Collector's Notes: K-3PO, alone, sells for as little as $6 on eBay.  I would suggest buying tons of them, and seeing how easy it is to dye and/or paint the white robot and get back to me.  The entire set unboxed can be quite cheap, although a boxed set goes for about twice its issue price.  I would suggest chasing down a loose set or buying them a-la-carte.   Compared to what a super-articulated figure costs in 2012, this set was a bargain, but in 2010 it still didn't feel like quite the deal the Imperial companion set was.  After all, it had the new mold AT-ST and a newly-tooled AT-ST Driver to go with it.  (The AT-ST had previously been sold as a Walmart-exclusive for about $44 and included only one figure.)  I still can't believe this is K-3PO's third action figure since 2000.

I really digg this droid. Glad they redid him in this set.