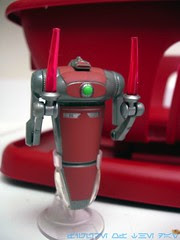 Bio:  Signal droids help guide the starspeeder during takeoff and landing..  (Taken from the figure's packaging.)


Commentary: I like this one.  The Signal Droid is pretty out-there as traditional Star Wars robot design goes, but it fits in nicely with the weird design aesthetic we see in Droids (the cartoon series) and the original incarnation of Star Tours.  Of course, this releases is from the new version of the theme park ride, but that's OK.  It's still cool.

With a "floating stand" and some signal hands which look a lot like lightsabers, this reddish figure has a big green eye and a whole lot of grey and silver.  Each arm has 3 joints bringing him to roughly a grand total of 6.  There's some fine sculpted detail on this guy, with little vents and other small lines to bring it to life.  One of the reasons I like this figure is I don't have any others remotely like it.  I love my droid repaints, but this is a completely new design which has this killer floating stand and unlike so many other figures, there was no moment of "don't I have a figure like this already?"  I realize that's pretty awful to say, but it's rare in this day and age to see a new figure which is actually a completely new character.   If you collect this subset of the line, you won't be disappointed.  If you're not a fan of theme park stuff or robots, move along.   I really like this figure, and if Hasbro and/or Disney ever felt so inclined I'd probably buy repaints or retools (say if they decided to give him claws for hands or something.)   I don't play with this figure much, but he looks cool and stays where I put him.  That's a plus.

Collector's Notes:  This is one of the stronger gift sets offered by Star Tours and for that reason, I suggest you buy it.  The set sells for as little as $25 on eBay, with individual figures for as little as $5, but the set is arguably worth the original $40 asking price.   Other than a dreadfully dull C-3PO repack, the other figures are all new or heavily repainted and that's good enough for me.

The design is actually from Episode II -- it's the droid we see installing the replacement window in Padme's apartment. They just subbed signal flares for suction cups.