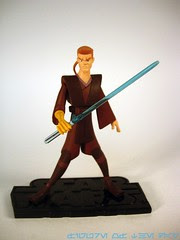 
Commentary: These animated figures started life as a Target exclusive, but eventually were opened up to a larger customer base.  While arguably in short supply relative to the movie figures, Anakin Skywalker wasn't particularly tough to find between the single and multi-pack releases.  With an articulated wrist, waist, neck, and shoulders, this release is more of a maquette than a toy.  You really can't play with it, but as display pieces go it's pretty fantastic.  The look is similar to the original animated series, although it really does feel like some of the late 20th century Warner Bros. animation with a smidgen of Chuck Jones' style to me.  (Although admittedly, I'm no animation historian.)

If you're like me and too cheap to shell out for a lot of the higher-end resin statues, this is a neat (and desk-friendly) substitute.  He can't sit, he has no action features.  All he can do is look cool, and as what is essentially a collectible figure, they did a good job with him.   This particular style of figure clearly benefits from reduced articulation, although I imagine I'd be furious if this were the only toy Anakin I could buy.

Collector's Notes:  Despite a local, loving fanbase this style of action figure is pretty worthless.  If you pay more than $5 per figure in this style, you probably got taken.  I see loose samples for under a dollar, and in lots, well, they go cheap.  If you skipped this sub-line the first time around, you were smart because they're much easier to find and much cheaper on eBay today.