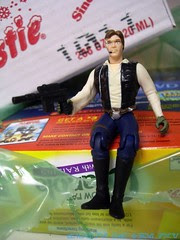 Bio:  Explore 7 Worlds of the Star Wars galaxy! Battle TIE Fighters, search for the Death Star and destroy the Empire!   (Taken from the figure's packaging.)


Commentary: There are figures we buy out of love, and there are those we purchased out of obligation.  While I love older Kenner figures, this Han Solo figure was one I remember putting off-- it's entirely possible I waited to get it on clearance online somewhere, I actually don't remember paying $40 for it.   What Hasbro did here was take its existing Millennium Falcon gunner station figure and tweak it, so now he has knees.  The figure is notable for also having his communications headset molded to his person, plus gloves.  With no waist joint, this Han figure was something of a lateral move.  Figures with knees were still quite uncommon in the line as of 1998, Han was one of under 10 releases to sport the joint at the time, and the sculpt really didn't look like Harrison Ford.  Heck, it barely looked like Han Solo, that head sculpt didn't age well and my sample could have stood to have had better eye paint too.   The look and feel is very much a Kenner 1990s figure, for all its pros and cons.  Mostly cons, because Hasbro lapped this figure in 2007.

He was engineered to sit in a big playset which could sit on top of a typical QWERTY keyboard.  The idea was you could sit Han or a figure on a certain chair and push buttons to control a game on your computer, which was an extremely clever and low-tech attempt to integrate new media with old-fashioned toy play patterns.  The oversized cockpit playset was nice and big, with plenty of room for other figures.  It also represents one of the last efforts from Kenner to really push something new in Star Wars, there were a lot of new toy play patterns being attempted by Kenner in the 1980s and 1990s and most of these went away by 2000.   If Kenner were still around today, I can't help but wonder if they would be releasing new figures which were compatible with the iPad or the Xbox Kinect in some way, rather than continue along as the keeper of an impressive brand and license portfolio that introduces new releases, but rarely pushes play forward.  (That is, in the items they release.  You should see some of the swell non-Star Wars innovations that, for some reason or another never made it out.)

Collector's Notes:  Like most items from the 1990s, this playset is now worth less than half its initial asking price.  You should be able to get one for $20 or so, if not much less.   As part of the complete Kenner collection, a charming era of figures which are cheap and in many cases well worth owning, it's worth it.  As a stand-alone thing, it's arguably more interesting as an artifact of the CD-ROM era of video gaming than it is a collectible in our favorite action figure line.   This kind of product died on the vine pretty quickly, which is a shame because I can't help but wonder what kind of computer integration Hasbro may have done had they stuck with it and really reached for the stars, if you'll pardon the expression.