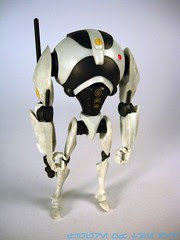 Bio: Super battle droids are used for target practice in clone trooper training.  Battle simulations are as real as possible to train clone cadets for the rigors of combat.  Captured and reprogrammed, the super battle droids have targets placed on areas where blaster fire will result in the most destruction.   (Taken from the figure's cardback.)


Commentary:  The 2012 Clone Wars line has been an odd mix of the sublime and the musk of disappointment.  Only 19 figures are supposedly planned this year, including repacks, so each new figure has to fire on all burners.  This Super Battle Droid is effectively a repaint of the 2008 mold which, frankly, nobody was asking for.  I'm super stoked Hasbro did it because it's just so dang weird.  I'm having difficulty telling if it's accurate to the show, but in its own right, it's cool!  There are bright yellow targets on his head, arms, and torso and a bright red light on his chest.  The figure has 8 points of articulation, and unlike the 2008 release (and subsequent reissues) he has only one launcher with rocket.  It plugs right in to his arm so you have the option of not using it, but previous figures had two and were cheaper.   So this sort of thing bothers me.

I like this figure because, unlike some of the newly-sculpted figures in this assortment in 2012, this repaint is obviously new.  It doesn't look like anything else I have, and the idea of a "training dummy" figure is endlessly delightful-- I hope Hasbro decides to do more some day.   There is also some scuffing on the figure, and it's both subtle and fantastic.  It's eating me alive that there's a chance Hasbro might not have more than a couple of carded Clone Wars figures this year, because articulation be damned, they've never looked better.

Collector's Notes: I don't know if you're going to see this one in the wild-- I haven't yet, and I'm a paranoid goofball.   If you see it, by it on sight.  If you don't, click the link below (thank you) and order one.   If you already bought training Hevy and his boys, this is a sensible additional purchase for that shelf of figures.