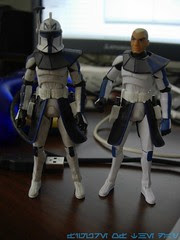 
Bio: Captain Rex accompanies Anakin Skywalker to the planet Teth to rescue Jabba's kidnapped son. Like all clone troopers, Captain Rex believes that the mission always comes first. When he and his fellow troopers are surrounded by battle droids, outnumbered and outgunned, he never wavers in his commitment to the mission, even if it means this battle could be his last.  (Taken from the figure's package.)

Commentary: For those in this line for the long haul, you're no doubt sick of Captain Rex due to his many reissues and variations.  Aside form the helmet-- which doesn't quite match the TV show design and was upgraded for later multi-pack releases-- the very first release is arguably the best.

In 2008 we started seeing prices really creep up and stay up, but at the same time Hasbro softened the blow with bonus accessories like build-a-droid parts and added accessories.  Captain Rex benefitted from some top-notch deco, bend-and-swivel wrists (total of 14 joints), a removable helmet, some guns, and the works.  Compared to the $4.99 figures of 1995, this was a "deluxe" release that, when inflation is considered, is still pretty favorable.  I mean, Rex has three guns, two rockets, various attachments, and a helmet.  Your best figure in 1995 had one or two weapons, and maybe a cape, and six joints.  Unfortunately, this also turned out to be the peak of what the line has offered in terms of the animated figures, as we'd see fewer accessories and reduced articulation on many future releases.  Even poor ol' Rex here, plus other clone troopers, would see the battle weathering paint operations dropped before 2008 ended.

The sculpt, while not perfect, is very good.  The only place I can really nitpick it would be the helmet (which lacks a moving rangefinder and the "chin" isn't quite right) and the elbows, which have the armored bit on the upper arm rather than the lower arm.  Aside from that, this is pretty close to a perfect figure.  You just get so dang much stuff in the box that it stood out as a really good figure in 2008, and if you compare it to the 2012 all-new Captain Rex, it's still quite good.  If nothing else, it certainly has more articulation and gear.  If you're looking to only get one Captain Rex, this should be the first one you look up.  The flight pack one from 2011 is good, and the Phase II one from 2012 has a gorgeous paint job, but the 2008 one is the most fun.  (And the most common.)  The snow one and the mail-away ones are also available, but eh.

Collector's Notes:  You should have no problem getting the clean version, or one of the Battle Pack/gift set versions, for $5 or less.  Even the "first day of issue" dirty release is worth $3-$5 these days, so if you want it, being able to afford it won't be an issue. If you can't spare $3-$5, you shouldn't be in this hobby.