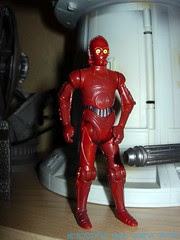 Bio: The Alliance's command center on Hoth includes the diverse tactical expertise of the impetuous Han Solo and the protocol droid R-3PO.  (Taken from the figure's packaging.)


Commentary: While Hasbro went all-out making new astromech droids starting in 2008, it seemed protocol droids were slated for a few retreads along the way.  Straight-up repaints of C-3PO have been exceedingly rare since the modern line kicked off in 1995, so getting a second take on R-3PO was something of a surprise.  This version was based on the 2006 C-3PO Endor Throne mold, minus the accessories.  Molded in red plastic with a dark wash, the figure has about 8 meaningful points of articulation  which makes him a little stiff-- appropriate for the type of character.  His hands aren't designed to hold anything, and personally, I prefer the even stiffer 2004 release's paint job and sculpt, but each is good for slightly different reasons.  I'll take any droid repaints I can get, and since the 2008 R-3PO (pictured) is redder than the 2004 one, they're practically different characters.

This figure is brighter, with yellower eyes and less paint on the arms, making it a more vibrant, more articulated release.  The other more muted one seems more at home on Hoth, but both are good for different reasons.  I mean, we can never get enough protocol droids right?   They could crank out yellow or blue ones and I'd be all over it.

Collector's Notes:  These sets are still pretty reasonably priced, and I'd suggest picking them all up just to get C-3PX.  The other Droids, Jedi, and other figures are a lovely bonus.

I don't recall a BAD R-3PO but I do have the darker one you speak of. Thanks for the "droid" of the day!