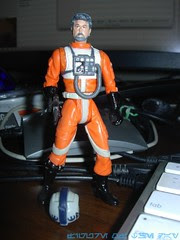 Bio:  Among X-Wing pilots, Commander Jorg Sacul is renowned for his inner strength, his ability to remain calm under fire, and his mentoring of younger Squadron members. Once a reckless dreamer, his life changed course after a near fatal crash in his T-16 Skyhopper on his homeworld of Tatooine. He went off to the Academy and emerged as the top pilot in his class and a natural leader. A visionary storyteller, he entertains the pilots in his command with far-flung tales of distant galaxies thousands of years before the Republic. Rumored to be Force sensitive, many say Sacul would have become a great Jedi... if only he had been born in a different time.   (Taken from the figure's cardback.)

Commentary: If you want to start feeling old, remember this: Jorg Sacul was the hard-to-find golden figure of 2002, just over 10 years ago.   The figure was the very first fan convention exclusive, and aside from the ridiculous wait in line to get him, this was the best execution of the idea.  You take a figure which already exists' body, Biggs Darklighter.   You put George Lucas' head on it, which never appeared in the movies hand him Captain Typho's gun and the 2000 X-Wing Luke's helmet.   Add a little paint (the figure has some orange plastic with orange paint on it, which makes it look better) and presto: you've made an exclusive which fans who went to the show will love, and hardcore fans may not care about enough to purchase since he's not a movie character.  It was an incredibly clever way to make a product which (in theory) would not infuriate collectors while delighting the fans who made it to the show.  (Of course, those of us who want everything are always going to be frustrated.)

Since 1998 bodies like Biggs' were pretty long-in-the-tooth prior to this figure's release, it was viewed by fans as a sort of cheap exclusive, and it was.  Heck, I applaud this.  Since George Lucas was supposedly on record as saying he didn't want an action figure of himself made as "Mr. Flannel Director Guy" this was the next best thing, which gave him a body closer to what he had during the original trilogy plus a head which looked like a younger sculpt with a little more grey.  Back in 2002 it was a delightful head sculpt, and it aged a bit since then.  He has only 6 points of articulation, but the little bonus X-Wing and the fact it's George Lucas as an X-Wing Pilot make it a delightfully goofy and fun exclusive.   Subsequent exclusives were hit and miss, with some selling well and others being horrible failures which you can probably get below cost to this day.  While I do love my McQuarrie Droids, this is probably my favorite overall show exclusive.  It's simple, clever, and fun, plus it provided a reminder that the 2002 line would still have connections to the original trilogy during the onslaught of Attack of the Clones releases.   Oh, the good old days.

Collector's Notes: This figure came out at $10, shot up to $60 (or more), and is now closer to $20.  $20's about right.  If memory serves it was only sold at the Celebration II store, which had a miserably long wait, and a limit of 2 per person.  Of course, you could jump between the normal line, and then the cash-only 2 figures for $20 line and get around those limits pretty easily.  Given some people were waiting in the line each day for 6 hours, I don't regret doing this.  The level of white in the beard varied from figure to figure, and some people will pay a premium for a whiter beard.

The store for Celebration II was the worst - hours wasted on mismanagement and inefficiency. Just terrible.