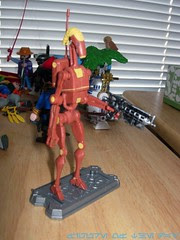 Bio:  Clone troopers fight Battle Droids to destroy a Separatist weapons factory. ARF trooper Waxer scouts ahead to gather information about the enemy.  He runs into a squad of battle droids, and stops these robotic warriors before they reveal his position.  (Taken from the figure's packaging.)


Commentary: When doing exclusives, Hasbro likes to reuse existing tooling-- it's cheaper and gives us a chance to build armies while allowing a retail store to have something special or unique.  This Battle Droid from the animated TV series is pretty clean, but includes yellow "command" markings setting it apart from the other tan figures.  Hasbro hasn't been particularly good at keeping its reds consistent in the cartoon line, so as a stand-alone figure it's pretty slick.  The gun has some nice weathering, and the yellow markings are pretty sharp.  You'll notice dots where his joints are (or in the case of the knees, aren't) as well as on the backpack.  While not the most colorful Battle Droid yet, it's in the top 3 and certainly stands out on the mostly-tan shelves of droids you've collected by now.   While I wouldn't consider this particular figure essential, the fact that it was paired with Waxer upgrades it to worthy of tracking down.  With only 8 joints it may not wow you, but it's a toy, and that's OK.  Go get one and have fun playing with it, and cross you fingers Hasbro might make more red "troop" droids easier to get between now and when they give up on the cartoon line, which I'm guessing is going to be late next year at this rate.

Collector's Notes:  This set sat for a bit, and you should be able to score one for about $15 before shipping.  Anything less than that would probably be a bargain.   Other red Battle Droids in the animated line include the Rocket Battle Droid and the pack-in with the Toys "R" Us STAP in the red-and-white "Legacy"-style packaging.