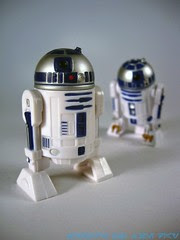 Bio: R2-D2, pronounced Artoo-Detoo and often referred to as Artoo, was an R2-series astromech droid manufactured by Industrial Automaton.   (Stolen from Wookieepedia.)


Commentary: The question of "what qualifies for this column" comes up a lot, but sometimes a weird, non-Hasbro figure fits right in like this R2-D2, which is basically a bonus, filler figure for the Starspeeder 1000 from Disneyland/world/whatever.   The figure is the same size as the other R2 figures on the market today, features one joint, is missing some detail, and is not the lamest R2-D2 on the market.  (That distinction goes to the 2003 Geonosis Arena one, which is the real junker.)

Given that this was a pack-in to a non-Hasbro (but Hasbro-compatible) fully-licensed vehicle, I'm not quite sure how to treat it.  I guess on many levels, it's neat-- ugly, but neat.  This shouldn't be your only R2-D2, because there are a few botched details like the lack of wiring on the feet, some unpainted panels, and oh yes-- the various elements on the dome aren't aligned properly.   If anything, this looks like a really, really good knock-off of the figure.  The dome details are a little soft but the paint colors were smart choices-- he has the little red light on his dome, the silver looks great, the blue is a little dark, but overall it looks like R2-D2.  It has no problems standing and in all honesty, the only reason I might knock it (as functionality goes) is that the dome is off-center.  To be "perfect," all it needs to do is look good on the dome, because the dome sticks out of the vehicle.  It looks OK, I'm betting most people who buy it won't notice and won't care, but once you own more than 30 different R2-D2 figures you get picky.

The only moving part on this figure is the dome, meaning this figure is sculpted incorrectly and a weak toy.  But as a slug to cram in a vehicle, it gets the job done.  I wouldn't suggest going out of your way to get one, but if you're buying the vehicle anyway it's an interesting, endearing, and largely not-entirely-accurate take on the character.  I think we can reach a point in our collecting careers where what would've once been an abomination becomes interesting, simply because I own several authentic, accurate, and nearly perfect R2-D2s.  This one isn't perfect-- but it's fun to fidget with and for that reason, I wouldn't throw it out if I were you.

Collector's Notes:  Correct me if I'm wrong but I think this is the only licensed movie character to exist in 3 3/4-inch action figure form which doesn't seem to have been made by Hasbro. (I'd even wager Lucasfilm didn't approve it given the dome, but I can't be certain.)  It's available at Disney parks or by mail if you call their DelivEARs service, and given the vehicle's massive heft I would suggest considering mail order if you aren't particular about the box condition.  (The ship was packaged well but seems torn prior to being shipped to me.  Checking it in your luggage won't work, as it's too big.)