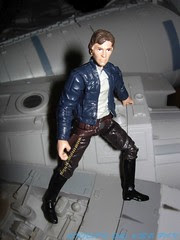 
Commentary: For whatever reason, Hasbro really likes to tease us with Han Solo figures by doing one that's pretty good, or really close to what we want, without actually giving fans what they expected.  Sure, we got some fine figures-- like the Bespin Torture one in 2007-- but fans were expecting a straight-up update to the basic, not-in-pain Bespin Outfit Han Solo.  It's pretty good, not only is it a legit update to the 1981 original, but it adds a welding torch and goggles to enhance the otherwise good-but-light offering.

This figure is a fine example of modern part sharing, as his legs are shared with the 2011 Vintage General/Pilot Lando Calrissian and the rest of him is pretty much new.  The jacket is sculpted to the torso and isn't a separate piece like the 2001 and 2007 Bespin Han figures, which, if you ask me, makes it look way better and less bulky.   The figure's 14 points of articulation are enhanced by ball-jointed hips, and the figure's holster is not connected to the leg this time around.  This helps with leg movement and better fitting him in the Millennium Falcon, but truth be told the holster still sort of gets in the way.  The figure lacks a "ring" around the thigh to simulate a strap from the holster to keep the gun secure, but when he sits, such a ring looks weird.  So as a thing they left out, I'm glad they left it out.  Overall it's a big improvement over previous releases, although cramming him in the seat of the Falcon is a little awkward.     The ball-jointed hips are great for displays and dioramas, but not so much for vehicle piloting.

This is, without question, the best overall Han from Empire and easily the best Bespin one to date overall.  If Hasbro can engineer one to fit perfectly into a vehicle's seat, that one will be the new king-- but overall, it's hard to imagine Hasbro improving on this design.  The goggles are snug, the torch is a nice bonus, and the card art looks so much like the original.  Overall, it's probably going to be the best Bespin Han Solo that Hasbro ever makes.

Collector's Notes:  Before the 2007 Torture Rack version, the last completely new Bespin Han was released in 2001.   So this figure's release was something quite exciting for a lot of us.  This figure was originally part of wave 7 in 2011, which was indeed released to stores but was tough to find in some markets.  (A Toys R Us near me seemed to have a steady supply of them, but it dried up by the fall.)  The figure was just reissued in April of this year on a nearly identical cardback, and it seems to be getting arguably better distribution this time around.  (I've certainly seen more of it.)