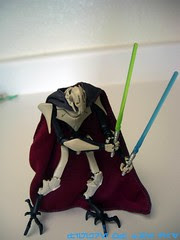 Bio:  Grievous, born as Qymaen jai Sheelal, was the cyborg Supreme Commander of the Droid Army of the Confederacy of Independent Systems for most of the Clone Wars.  (Stolen from Wookieepedia.)


Commentary:  This General Grievous basically refined the animated sculpt into something better.  Remember that really rubbery 2010 Grievous with the battle-damaged arms and head?  Well, this is the same sculpt [edit if it wasn't clear: same/similar sculpt, but a new mold with some changes made to simplify and therefore improve it, such as the shoulder pieces not being removable] made out of stiffer plastic with a little less in the way of parts-- and it works better. The cape is designed well, with a silkscreened symbol on his back, a red lining, and it just looks cool.  The problem?  Well, the part around the neck is a little thick, and you're going to have to futz with it to make it look good.  It's still on the happy side of decent, and I dig it.  The green and blue lightsabers look superb, and the off-white coloring of his armor looks about right-- like it might be ceramic, with an organic being locked inside.  It also doesn't fall to pieces like the previous [2010] version, so this is a real step in the right direction.  If you buy this set, you'll probably like this Grievous and the clone Kix.  Rex, well, he's not too special.  But he's OK.  If you can get it cheap, get it.  At regular price, it's still decent.

Collector's Notes: How many animated Grievous figures do we have now?  At least 5, plus the 2003-2005 style one?  Well, there's a bunch of options.  I like this one because there's no fall-off shoulder armor and he seems to be more or less OK standing up, which is about all I want.  I still fear it sagging over time, but this design doesn't really defy gravity.  It's not bad.  I like it.