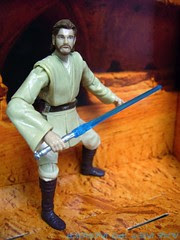 Image: Adam Pawlus' Geonosis backdrop, which was thrown away by the time you read this.


Commentary:  For some reason in 2010, Hasbro decided to do another round of Geonosis Arena Packs with a lot of figures we've had a few times by then.  Obi-Wan Kenobi is notable in that has has an exclusive head sculpt, but is otherwise fundamentally the same as the "Legacy" single carded figure.  He has a repainted lightsaber and an unusual facial expression which, honestly, is the main reason you're going to want this specific figure.  The open-mouth look is quite different from other releases, and as such is different enough to be interesting.  Of course, if you have the "regular" version of this mold, you can probably live without this one.  14 points of articulation and a Super Battle Droid make this set a pretty good one, particularly since Target marked these down a few bucks right after their release in October of 2010.

Collector's Notes: Target did Arena 2-packs in 2009 and 2010, and the 2010 ones sold out first.  For some reason, 2009 packs continued to show up long after the 2010 sets vanished, and they're not super-common on eBay either.  I'm still not entirely convinced the series got a full distribution at retail, but as of yet we've never seen or heard of these dumped en masse outside the Target chain.