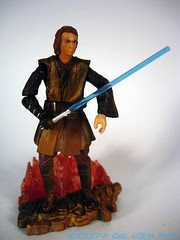 Bio:  Anakin Skywalker was a heroic Jedi Knight who became seduced by the dark side of the Force.  Now a servant of the Sith, Darth Vader turns his lightsaber against his former master in a duel for the ages!   (Taken from the figure's cardback.)


Commentary: Over the years there have been a few figures which I've bought and not opened, and Darth Vader (actually Anakin Skywalker) was one of them.  Like many of you, I bought this Target exclusive figure at $12.99 when $12.99 for a repaint of a $5.24 figure was considered obscene.   This figure has fewer accessories than the regular release of the mold and costs significantly more, and we all lined up to buy it.  Mostly.  Some people found these on clearance later, so it's not exactly something everybody jumped on when they had the chance.

This particular release has a swell extra coat of paint (clearly not worth the original asking price) but it really is nicely done.  The figure and base have this eerie metallic light glow coming off them, and in many respects it's a shame Hasbro decided to mine this "lava reflection" territory before the figure sculpts were as good as they are today.  The 2005 sculpts weren't bad, but the 2010 ones are so much nicer.  This is a perfectly serviceable Anakin mold with the squeeze-legs-for-swinging-action and a lightsaber embedded in his fist, which arguably makes it a good toy.  Unfortunately, at $12.99 this was not meant to be a toy, and was clearly marketed to us older suckers who, for a couple of years, Target would consistently remind will buy almost anything at a big markup.

Since the figure can't sit and has a sculpt which didn't quite age well, the reason to pick this one up is as a display piece.  I like the deco and the current asking price isn't bad, so as a toy for your desk it's pretty great.  I wouldn't suggest buying it for your kids as the non-lava version of this mold has more gear with it, but the paint job is nothing to sneeze at in person.  Hasbro even took care to give him those oh-so-cool Sith eyes, although this wasn't the best execution of that detail.  (Heck, it wasn't even the best execution for 2005.)   I'd say it's arguably worth tracking down, I like it more than the matching companion Obi-Wan Kenobi figure, but it's by no means essential.

Collector's Notes:  There are two "Lava Reflection Darth Vader" figures.  The one released in April 2005 was a redeco of a Return of the Jedi-based sculpt from about 1998, while this unarmored one was based on a 2005 Anakin Skywalker figure.  Today, the figure is worth about five bucks, and it's weird and interesting for the asking price.  Oh, and this was reportedly "limited" to 50,000 pieces, which is a lot.