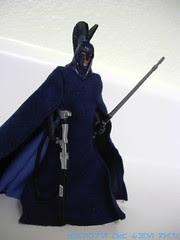 Bio:  Celebrate the legendary Star Wars saga that changed the universe forever! This collection brings to life the incredible story of good versus evil that captured our imagination and took us to a galaxy far, far away. Iconic Star Wars heroes and villains are captured with incredible detail and premium features to commemorate each epic tale in the Star Wars saga. May the Force be with you!    (Taken from the figure's packaging.)


Commentary: New arms, a  new head, new accessories, and new paint make the Senate Guard worth a look.  While Hasbro's case assortments (and pricing) make it difficult if not impossible to army-build anymore, this is a figure I really do wish I could get some more of.   One ain't enough, because the enhanced articulation improves greatly on the already-good 2005 Senate Guard from Revenge of the Sith on which the figure was built.  There are no knee joints, but the older figure has now been upgraded with  ball-jointed elbows and that makes a big difference.  One of the most interesting things about the figure is that it looks like Hasbro gave it a removable helmet-- they didn't, but they put enough work sculpting and decorating the figure so that the helmet and face are not the same piece.  This reduces paint slop and results in a better looking, arguably more realistic figure.  The cloak has been redesigned and looks wonderful, now it has a lining and the material selected just plain hangs better than most of the cloth we see on figures.   As upgrades go, Hasbro even added some shoulder armor to beef him up a bit and align him closer to the animated versions of the guards on the recent Clone Wars cartoons, which is a heck of a nice touch.   Coruscant's guards never looked better, so I'd suggest you grab this one if you ever get the chance.

Collector's Notes:  This is one of very few figures to have a significant photo variation on the front of the card.  You can see a full-body shot, or a head close-up.  The figure may be available at a TJ Maxx or other deep discounter near you as this wave made the clearance rounds for about $5 per.  Also, the redesign (and force pike) hint that Hasbro may be planning on reusing this mold yet again for new red Emperor's Royal Guards, and I for one can't wait to see how a "vintage" one might turn out in 2012 or 2013.  After all, the 1983 original remains a tough figure to top!

Email ThisBlogThis!Share to TwitterShare to FacebookShare to Pinterest
Labels: Attack of the Clones, Senate and Royal Guards, TVC

You're so right about the "action feature."

I think you meant "there are no ankle joints", as this figure has ball jointed knees just like the 2005 figure did.