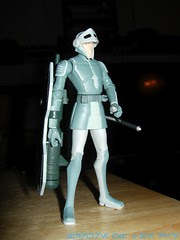 Bio:  Mandalorian officers maintain order on Mandalore. Because this planet of warriors has become a world of peace, the guards are seldom needed for more than minor issues. But the Death Watch group has begun committing acts of violence, so the officers are prepared with riot shields and weapons, in case all peaceful solutions fail.  (Taken from the figure's packaging.)


Commentary: Since the line started, Hasbro has been pretty consistent about who does or doesn't get extra articulation.  The Mandalorian Police Officer doesn't, although he does get about 10 joints which isn't all that bad and, sadly, is more than we're getting on new figures in 2012.  Modeled after the character designs on the show, this figure is another kind of Mandalorian, the kind that's less awesome but is still kind of neat.   The armor still retains vestiges of Boba Fett's design, and the helmet reminds me more of European Knight helmets than anything else.  The riot shield and baton are pure Earthiness (but adapted to fit the new planet), complete with "22" written on it in Aurebesh for some reason.

While I like the design, I didn't get much use out of the rocket launcher accessory.  It plugs into the riot shield nicely, but the oversized projectiles are less fun when they're about the same size as my action figures-- they throw figures off balance, and trying to shoot them while the figure holds them is difficult.  Still, the guy can hold all of his gear and is close enough to the TV model where I'd suggest you pick up a couple if the chance comes up.

Collector's Notes: Unpackaged samples sell for as little as $1, so you can probably afford this one right now.

I use this guy as a Metropolis police man.

There are hundreds of these guys still clogging shelves here in Calgary, where btw I NEVER even saw the carded Mando warrior!