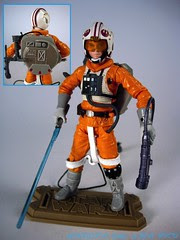 Bio:  Luke Skywalker destroys an AT-AT walker at the Battle of Hoth.  He attaches a zip line to an Imperial walker to pull himself up to the vehicle's undercarriage.  After planting an explosive in the walker, Luke releases the zip line and drops to the ground. Moments later, the bomb detonates and rips apart the walker.  (Taken from the figure's box.)


Commentary: When I saw that Hasbro was making a just-different-enough-to-make-you-mad Luke Skywalker in his snowspeeder pilot outfit, I wasn't sure why.  The mold has gotten decent mileage since its late 2010 debut, and its reappearance today doesn't make a heck of a lot of sense in the context of the current line. There's no Snowspeeder and no AT-AT, nor is there an X-wing to run out and buy.  It's just a reissue of an existing "collector" figure with a new backpack aimed to make it more kinetic or dynamic for kids, and I'd say it doesn't quite work as a proper "toy."  If you're a collector wanting another (retooled) copy of the mold, though, you're in for a treat.

Basically the same as the 2009 Legacy Hoth Rebel Pilot Luke, the figure now has a hole on his back to accept a backpack, a new tab on his belt for... some reason, and his grapple gun no longer has a grapple hook.  Instead, the super-articulated figure's hook is now attached to a newly tooled backpack which the figure can slide down if you're so inclined.  I love zip lines as a toy, but the execution as of late is disappointing.  The figure can't hold up his arms and slide (more or less) horizontally, all he can do is fall down the string, much like how he never did this in the movies.   A climbing backpack would've been super-cool, but Hasbro didn't put that mechanism in this accessory, unfortunately.  And for the record, I could totally get  behind anything that would let Luke ascend and attack an AT-AT or other vehicle.  That makes good sense.  This doesn't make sense beyond a simple "hey let's rerelease this figure, it should sell, give him a fancy backpack because the kids eat that crap up right?"

With the minor tooling changes and backpack, this figure is different enough to warrant a second (or third, or fourth) purchase.   The figure changes aren't significant, but the accessories are new and frankly can we ever have enough rebel pilots?   The figure is good and has excellent deco, so you totally should get some version of this mold.  If you already have it, this one doesn't bring a ton new to the table, which is just as well because it doesn't seem like he's going to be easy to find anyway as Hasbro barely trickles out new Movie Heroes figures these days.  I generally get very excited about "toy" figures, particularly action backpacks as we rarely see them. The problem here is that the backpack is sort of a limp accessory, if it could store guns or climb or do something other than let Luke slide down it, I would consider this a fun, creative item.  As it stands... it's a thing, and you can buy it, if you want to do so.

Collector's Notes:  At one per case in a case which gets very little distribution so far, this is the very definition of "hard-to-find new figure." It doesn't help that the figure comes with 2 new light-up Darth Vaders in a box with 9 carry-forward figures, so it's entirely likely that you will not only never see it, but not realize it was there and you missed it.  He's was commanding a hefty premium on eBay, but I have since seen it around at numerous Targets in my neck of the woods.

Hefty premimium for a "Malibu Stacey with a new hat"?

Why do they never include the explosive charge Luke uses?

I'm fine with the two Snowspeeder Lukes I have.