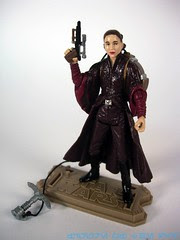 Bio:  Queen Amidala fights to free Naboo from the invading Trade Federation forces. Disguised as one of her handmaidens, the queen infiltrates the Theed Royal Palace. She uses a zip-line to ascend the outer walls of the palace and reach the throne room, in an attempt to capture Viceroy Nute Gunray, the leader of the Trade Federation.  (Taken from the figure's box.)


Commentary: It's always weird reviewing figures since 1999,  because so many like Queen Amidala seemed fine on their first (and second) go-rounds.  Of course, that was in 1999, when we were all a lot easier to please.  When you get right down to it, 2012 Amidala is a real improvement, although it's an improved action figure and not an improved super-articulated marvel of toy engineering.  For this reason, I like it.  I've seen enough of what Hasbro can do with 14 points of articulation and zero toy features, so I was pretty happy to see them try something totally different.  The cloth cape from the second release is gone, and her outfit is significantly more detailed this time around.  The level of sculpting since 1999 is so amazing, it's probably how we felt when comparing a 1999 figure to 1978-- in just ten years, we've come a really long way and the new one is an unquestionable improvement.  She can't sit, but she does have decent leg movement and has an overall stronger sculpt.

She only has 8 joints now, the basic 6 she had in 1999 plus ball-jointed elbows. Her neck also has a ball joint this time around, but swivels are increasingly uncommon these days.  The figure's overall functionality is better than previous releases, and the face is an area that's both better and needs improvement.  If Hasbro spent a smidgen more on paint, she'd look pretty.   As it is, she's pretty pale.  A little more color would do her some good, as she looks quite pale. The sculpt seems good, though, not quite as  bright and ridiculously cheery as the previous versions, but good.

Rounding out the figure is a nifty new "action" accessory, which is less fun than it looks.  I think.  I was hoping for a backpack where the figure could climb up the rope, but all she can really do is slide down it. (Which is, I guess, what zip-line is, so what am I complaining about?)   It adds some nice visual heft to the figure and she looks more ready-for-battle, so no complaints there.  I wish it did more than just slide down a rope (like act as gun storage or something) but hey, it's not bad.  If the rope was longer, though, it'd be way more fun.   I like her, but I like new sculpts with limited articulation because I find it delightfully refreshing.  I'm complaining too much for a figure that's really good and fun, there's something wrong with me. Just buy her.

Collector's Notes: Still hard to find, Hasbro held back its 7 completely new sculpts in Movie Heroes until after the first wave saturated.  You may find her in a store near you, but I wouldn't count on it.  Her secondary market price is all over the place, but I'd say anything under $10 is a big win.