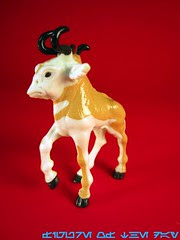 Bio: The ikopi was a fleet-footed ungulate with telescopic legs for fast locomotion. They lived in the plains and swamps of Naboo and its moon Rori and they traveled in herds.  ( Stolen from Wookieepedia. )

Commentary: I'm a big fan of creatures and those of you who know me understand that I'm on a minifigure kick right now.  I dug out my Ikopi and other Battle Bags figures from 1999, and I gotta say I'm somewhat impressed.  I didn't pay the $10 at the time ($2.24 clearance = yes), but by modern standards these small, non-articulated, ambiguously scaled creatures are pretty much worth the asking price on the secondary market.  $5 or less for 4 painted alien creatures?  Yes please!

Either not in scale, or a juvenile example, the 2-inch-ish Ikopi is a fraction of the size that a 3.5-meter-tall adult would be when compared to the action figure line.  The drawings from the super-cool The Wildlife of Star Wars: A Field Guide (which I have and adore)  show this as a very tall creature with a stretchy, frog-like tongue. Freaky!  The Naboo space antelope can stand fairly well and has a little bit of paint.  The figure has black horns, eyes, and hooves with a little bit of brown on his fuzzy body.  As a creature with very few representations in the toy world, I'd suggest grabbing this figure from this set.  If you want a full-size, action figure-scaled toy though... this ain't it.  And there isn't one.

Collector's Notes: Minifigures offer a cheap thrill like no other.  Painted or unpainted, tiny or smallish, they're fun and are great desk toys.  This particular series also happens to not be worth much, so you really have no excuse for not buying these... unless you don't want them.

I thought FOTD was for 3 3/4 inch scale figures?

Who cares? It's his column and this entry is a hell of a lot more interesting than the various "different enough to make you mad" entries. Keep em coming Adam, some of these things I forgot I owned (or forgot existed) before you call attention to them in your blog!