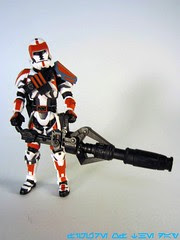 Commentary: As one of precious few figures from The Old Republic so far, the Republic Trooper (much like the Republic Commando figures) looks like a product of its time.  The various angles on the armor, plus the camo and overall chunkiness feels like it came from a post-Master Chief world.   Having not played the game I cannot list off the differences in designs, but as a toy, it's pretty good.  Really good, actually.  With 14 points of articulation, tons of gear, and a good paint job, this is what everybody wants in an action figure.  If a Stormtrooper had this much stuff, or even a Sandtrooper, your mind would be blown and it would cost a heck of a lot more on the secondary market.   His belt and pauldron are removable so you could make a squad look "different," were you so inclined, plus the knife, pistol, and giant cannon could make a squad of the same figure look like an army made of unique individuals.  Well, until you pop off the helmet - underneath is a human head, clone-like in appearance but clearly a different person.  The battle scar and facial hair deco is a nice touch, particularly since most people will display this figure with a helmet on and never see what's inside.

The Trooper's armor is white, clean, and sculpted nicely. His black bodysuit has grooves and subtle detailing, particularly around the belt and the waist.  Heck, even his shoes have more paint than most figures these days.  I have to assume that of the assortment, this figure probably cost the most.  You can see Hasbro put a lot of love and attention here, and held back on making cuts.  You don't need a giant two-handed cannon that's as tall as the figure, but you have one!  How often an you say that?  The helmet fits without being too big, and the head inside looks good without looking like a pea.  There's even an orange buckle around the belt which could've been cut and you'd never notice it.  In terms of execution, this figure was one of 2012's absolutely best releases.  It's a pity it remained exclusive to the Internet... unless Hasbro decides to do another run of them, and I do believe that they should.

Collector's Notes: As the only Republic Trooper you don't need much advice on if you should get it.  Do you want it? OK, get it. There aren't any other versions.   For Star Wars gamers this figure should be considered essential.  For everyone else, if you can ignore it and save a few bucks, I suggest that you do so because money doesn't grow on trees and reissues abound this year.