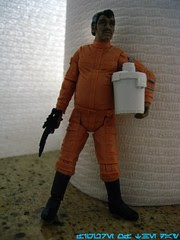 Bio: Willrow Hood works for the gas mining company on Cloud City. When the Empire seizes control of the city, Hood destroys a computer memory core to prevent the Empire from discoviering information about secret transactions with the Rebels.  (Taken from the figure's packaging.)

Image: Adam's old LA apartment's kitchen.  I took this a few years ago... this is probably from early 2010.

Commentary: There are two Star Wars figures that come to mind as existing largely in spite of any sane company's better judgement because fans raised awareness for it.  Did the fanbase actually want Willrow Hood, aka the Ice Cream Maker Guy?  Or did a couple of fan sites manage to stir the pot with petitions and basically raise awareness of this character to levels where thousands of fans knew who he was, so that it went from too obscure to even be a joke figure to an actual, viable option?   Sometimes gag figures come out at a good time and the marketplace more or less takes care of them, courtesy of their lower production runs as part of a "last wave" of an assortment or just generally being interesting.  Mr. Hood came out near the end of the line, but not close enough to the end to disappear neatly.  Stores were still ordering this wave and most of the other figures did quite well. He sat around for a bit, and was probably the one "new" figure from this wave you were most likely to see hanging around.  There's a big difference between the vocal fans who write about stuff and the silent fans who actually pay money.   He did do better than Leesub Sirln, who I am pretty sure nobody asked for, and slots for all-new, never-before-made-as-a-toy figures are more precious resource today than they were in 2009.  (Do you know how many new, never-before-made-as-a-figure non-exclusive characters we got in 2012? About 10.)

All complaining aside, it's a pretty decent figure and probably one of Hasbro's cheaper releases.  The all-orange suit has very little paint, short of some silver on the arms and black on the boots.  Oh, and his head.   The all-to-familiar speed suit is recreated here with a little bit of a gut, and quite a bit of articulation.  14 points?  That's surprising.  There are more wrinkles on the toy than on the movie's still shots, plus as far as I can tell he didn't have a gun on the big screen.  It adds a slightly more menacing element to the figure, which I feel sort of misses the entire point of it in the first place.  Lando tells people to evacuate, and two seconds later you see a guy running around with an ice cream machine.  Not a gun - an ice cream machine.  That, ultimately, is the entire appeal of this figure, it's basically an internet meme that somehow got made to the tune of dozens of thousands of units.

He does a good job standing, sitting, and most importantly holding his gear.   This is a high-quality execution of a so-so gag, and as such it's noteworthy for Jedi Defender and the sites that banged the drum to bring it into being... heck, even the fans who didn't like it and complained raised awareness of the character and probably helped serve up some units.   There really is no such thing as bad publicity, and when it comes to all-new characters there is very rarely such a thing as a bad Star Wars action figure.

Collector's Notes: Pricing is all over the map for this guy, but he's usually below $10 and if someone lists it on eBay for $1 or $2, he'll sell for that.  If and when I ever get to write a book about this hobby, this guy is going to get special mention because it really is a magnificent symbol.  Not only does it show what can happen when fans get together, but it also shows that the line got so big that, after a point, a character this ridiculous becomes a viable option simply because there really aren't all that many other good figure candidates to fill out a movie-themed Empire Strikes Back wave.  The fact that this figure exists is pretty amazing, but there's one last figure to discuss whose right to exist I call more into question.

Email ThisBlogThis!Share to TwitterShare to FacebookShare to Pinterest
Labels: Cloud City, The Empire Strikes Back, TLC

Customs for the Kid said...

What I like most about this figure is that it gives me a different type of torso to customize with. If he's cheap, grab him, and grab many. Not every character that you create will be slim and trim. We need some bellies on our Star Wars figures too. I've used him lots of times. He is one of my all-time favorite figures for this reason alone.

Hasbro, if you make a figure right and give customizers something sculpturally unique to enhance our craft with like you did here, we'll buy them in droves.

How do I know?

I buy him every time I see him.

He always looked Indian to me.

This was the last Star Wars figure I ever bought. My collecting had slowed somewhat when this was released, and nothing has interested me terribly since. I guess it seemed like a good one to go out on.

The paper towel Bespin hallway in the photo is Niub Niub-worthy. Kudos for the simple inspiration.