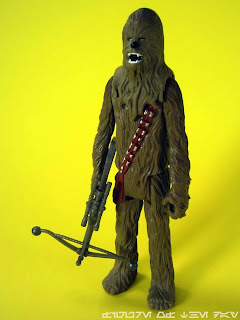 Bio: Han Solo and Chewbacca are swept up in the Rebel Alliance's struggle to free the galaxy from the evil Galactic Empire. These two unlikely heroes help rescue a princess and deliver plans to the Rebels that help them destroy the Empire's Death Star.  (Taken from the figure's cardback.)

Commentary: You can't have Han Solo without Chewbacca, so it makes sense that we'd get one here.  It's a figure that feels close to great, but it's a little undercooked.  The deco and his weapon are the sour points, but the sculpting and articulation are more or less exactly what you would want from a figure like this.  (And for the record, I don't expect most of you will want a simplified Chewie.  Me, I'm OK with it.  I like weird figures.)

Compatibility with the big Millennium Falcon is something most Chewie figures lack and I'm thrilled to report this one can sit in the cockpit.   There's no dangling Chewie man purse to get in the way of sitting - just pull the seat back, and presto, there he sits.   The joints for his hips swing forward without restriction too, so from an engineering perspective this is probably the best Chewbacca to play with since the line rebooted in 1995.  His head looks a little skinny, but I'm OK with that.  The fur sculpt is quite nice, and while it lacks the articulation of the 2004 Vintage Original Trilogy Collection Chewbacca and his descendants it also lacks the hanging fur and ugly torso joints.

The biggest problem with this figure is that it's for kids. Since Hasbro did something terrible for children, it's likely both adults and young fans will walk away from this figure disliking it.  The bowcaster crossbow weapon is three separate pieces held together with a clear rubber band.   It you take this rubber band off - and of course you would - the scope part falls off easily.  I didn't even realize I had knocked it off several times after I opened it.  It will not stay put - you're going to need to glue it or prepare to lose it.  It's up there with TK-421's commlink for the winner of future-most-lost accessory.  The bowcaster is otherwise nice, it fits easily in Chewbacca's hand.  No kid-driven figure (or accessory) should require any post-factory modifications to avoid falling to pieces, so I don't think any reasonable fan (or apologist) can make a case for it being this way.  I don't care if it saved one-tenth of a cent per figure across thousands of figures - it shouldn't fall off like this.

Deco is a mixed bag - I've seen a few of these and the eyes and teeth are clean on some and not on others.   If you see it in a store, examine Chewie's head closely before making a purchase.   You'll also note that his fur color is off - this is another thing Hasbro could easily fix in a running change if enough fans make a stink of it, but you guys won't, because lately you can't be bothered to say much to Hasbro or on forums other than distribution issues.  So we'll all just suffer with this desaturated brown color that looks like an aging Chewbacca is starting to go gray.

His claws are sculpted but not decirated, and there aren't many painted highlights on his fur.  The color choice is particularly frustrating because the bandolier looks good and the face looks nice.  If it was a terrible sculpt, it'd be a lot easier to just not care.   It's still decent - I love how he lacks the giant and annoying strap for his weapon and fur that looks like its gravity-specific in how it should be posed.  This new Chewbacca is a lot like Mission Series R2-D2 in the sense that it's frustrating just how close he got to being the perfect modern-era toy (for kids) action figure.   On the bright side, Hasbro could easily remedy all of these problems with their existing tooling.  A tiny bit of glue and a different mix of brown plastic would make it a huge improvement and would upgrade it to a worthy pilot for anyone with the 2008 Legacy Millennium Falcon.