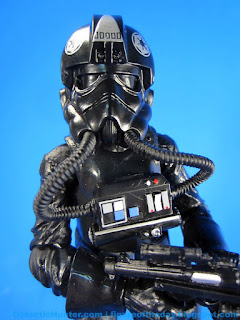 Bio: Lt. Oxixo piloted one of the four TIE Fighters shot down while pursuing the Millennium Falcon during its escape from the Death Star before the Battle of Yavin. (Taken from the figure's packaging.) 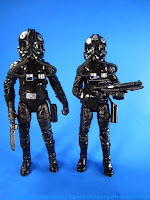 Commentary:  Who is Lt. Oxixo?  I got asked this a bunch - if you're OT orthodox (read: ignored the writings of the late 1980s and 1990s) he's nobody - but if you followed the RPGs and CCGs and later Hasbro figures, he's another pilot.  I couldn't place him in the movies from memory - Hasbro placed him at the Battle of Endor in 2011, and I get to experience memory failure as I would've bet money he was in the Decipher CCG - but dang if I can find him on any of the lists!  Hooray, failing memory.   I can find Mauler Mithel, though, so what I'm saying is this: don't get old.   Hasbro sold him as part of an Endor set originally, but the helmet design is - I believe - only seen in the original Star Wars.  Correct me if I'm wrong, I'm not the expert I thought I was on the TIE Helmets because this one got by me and my CCG memory.   As to why - because he was there!  And there were only so many molds to redecorate and tweak at the time this went in to development. 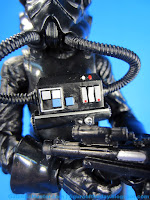 So, what's special here?  The helmet! Also the chest and the buttons on his sleeve.  TIE fighter pilots don't have a lot of variation in their costuming - there's a lot of black and, on the whole, the various helmet decorations were left unchecked for ages.   Nobody in the 1990s was clamoring for any variant helmet deco, but eventually Hasbro started adding the various stripes or slight tweaks (or removals) of certain elements.    Oxixo has a big silver mark on the front of his helmet with little black boxes at the bottom of the border, an added silver stripe on the tube at the bottom of his chest panel, remixed button deco on his left sleeve, and some red indicator lights on his chest switches.  There's even an added silver mark on his blaster. 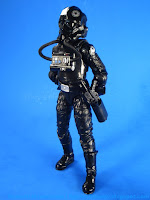 Articulation is the same as the standard version from last year which gives you about 20 joints.  He's great - the elbows move fairly well, you get bend-and-swivel elbows, and of course you're given double-jointed knees.   A working holster stores the blaster if you're so inclined, but I'd rather have it visible so you can see the unique marking.  It's not much, but hey, it's something. 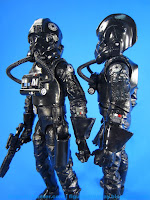 While all TIE Fighter Pilots do look pretty much alike, Oxixo has enough distinctive changes on this particular action figure that I don't mind having another one in my one-of-everything-no-extras-dammit 6-inch collection.  I'd be lying to you if I said it's absolutely essential, but it's just as good  as (possibly better than) the standard edition of the trooper - I think the silver crest makes him look a tiny bit more lively.  If you're buying the set, this one looks about as distinctive as a second TIE Fighter Pilot can look within the confines established by the movies.  (Granted, there are other variations, but I don't expect we'll be seeing them any time soon unless there's a ship to go with them.)